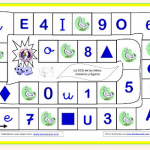 This traditional Spanish game, El juego de la oca, is a board game similar to Snakes and Ladders. Players roll dice and move in a spiral to reach the center of the board. If they land on la oca (the goose), they move ahead to the next oca and roll again, saying De oca a oca y tiro porque me toca. If they land on the bridge, they move to the next bridge and roll again saying De puente a puente y tiro porque me lleva la corriente.

These printable versions of el juego de la oca are made to practice vocabulary associated with the vowels and the different letters of the alphabet. There is a PDF for each version that includes the board and also a key to the spaces – the vocabulary word that matches the picture. The game with the vowels in particular uses common vocabulary and works well in lots of classes. These games are based roughly on el juego de la oca, but the boards do not include any of the traditional spaces.

Since I wrote this post, the link to the following game has been removed. I am leaving this content because the phrases and content can be adapted to a hands-on version of the game.

This is a wonderful online educational version of this game. You can choose from these topics:

Options:
After you choose the topic, you choose from one to four players. Click jugar and on the next screen choose eligiendo (select an answer)or escribiendo (write an answer). Eligiendo is easier and it also lets you play even if you do not have a keyboard configured to write the accents. (This game will not recognize the <option> letter combination that I use to write accents on my Mac).

Rolling the dice and moving:
At the top of the screen it will indicate whose turn it is (by color of the ficha) and you click to roll. Players move their piece the correct number of spaces. If a player miscounts, it says Te has equivocado al contar and the  player loses a turn. (If the piece moves at all, the game considers that you have miscounted, so be careful when you drag and drop the ficha.)

Play:
For each topic, there is an explanation of what players have to do. For example, for many of the topics, players identify a photo.  In addition to the spaces with numbers, the board has these traditional features: la oca, el puente, los dados, la posada and la calabaza.

La oca:
You hear De oca y oca y tiro porque me toca and the game moves you ahead to the next goose. You roll again.

El puente:
You hear De puente a puente y tiro porque me lleva la corriente and the game moves you ahead to the next bridge. You roll again.

Los dados
You hear De dado a dado y tiro porque me ha tocado and the game move you ahead to the next set of dice. You roll again.

La calabaza:
You hear Suspenso total and the game takes you back to the beginning. You have to start again.

To finish the game you have to roll the exact number.

Notes:
The vast majority of the vocabulary in this game is standard. The game is from Spain though, so some of the words, especially in the food or clothing categories might be different than what you know or are teaching. If kids are choosing an answer, they can often guess by the process of elimination, and it is an easy way to talk about the variety of vocabulary in the Spanish-speaking world.

A couple of times when I have played this game, the picture that a player was supposed to identify did not load. The answers were there, but there was no way to get the page to load the picture. This did not happen often, but when it did, the only option was to choose an answer at random to keep the game going. It was inconvenient, but as I said, it has only happened a couple of times. Even with the glitch, the game is excellent.