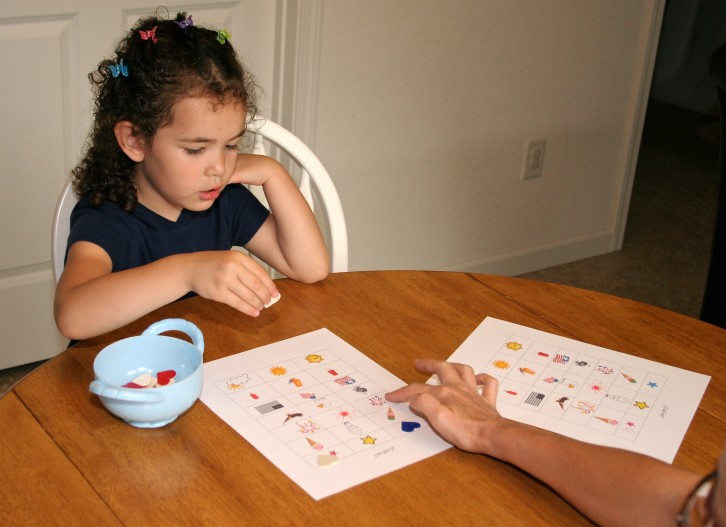 This printable Spanish game for kids uses words we associate with the 4th of July. It is a fun way to speak Spanish as we celebrate our country’s independence. The game can be played in different ways, so you can adapt it for kids of different ages and levels. The link to the printable PDF is at the end of the post.

If you’re looking for more activities for specific vocabulary, check out all our Spanish vocabulary games grouped by theme.

You will need to print one or more game boards, depending on how you want to play. Also, print an extra game board and cut it apart to make cards. You will need small objects to use as markers.

How to Play the Spanish 4th of July Game

There are a couple of activities you can do where children can hear lots of Spanish but do not have to produce the language.

One is to talk about the pictures as you match the cards to the pictures on the board. Draw a card and describe it as you look for the picture together and then put the card on the picture. Talk about how it is different than the others in the row.

Three in a Row

As you play, describe the picture on the card and compare it to the others on the board. Children hear the vocabulary and structures and that makes playing the other games easier. For example, you can say things like Es una estrella amarilla. Esa es azul, y allí hay dos estrellas rojas. Es ésta. (It’s a yellow star. That one is be and there are two red stars there. It’s this one.) This may seem repetitive and overly simple, but will help children learn Spanish. 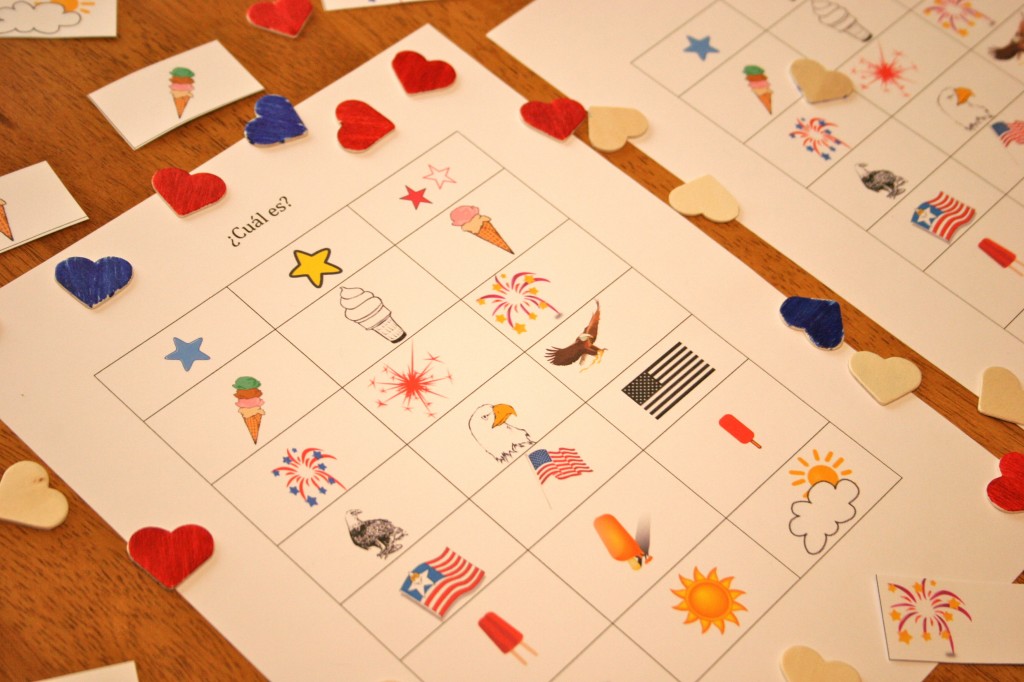 For children who speak more Spanish, you can play the game in several ways. The simplest Spanish game for kids is cooperative and can be played with one game board. Players work together to describe and guess the pictures. Play a cooperative game this way:
– Place the cards face down.
– Player 1 draws a card and describes it, without showing what it is.
– Player 2 puts a marker on the picture she thinks is being described.
– Player 1 shows the card and if the marker is on the correct picture, they leave it there.
– If it is on the wrong picture, they take the marker off.
– Player 2 describes the next card.

As there are fewer cards and more pictures covered, the game gets easier. You can also start with just some of the cards.

You can also play a Spanish game for kids with two teams. The teams take turns drawing a card and describing it to the other member(s) of their team. The team with the most pictures marked wins.

Three people can play another version of this Spanish game for kids. They each need a game board. Player 1 draws a card and describes to Player 2.  If Player 2 puts her marker on the right picture, Player 1 also covers that picture. If she does not get the right picture, no one marks anything. Then Player 2 describes to Player 3. Play continues around the circle with  players who are describing and players who are guessing marking the pictures they get right.

There are many ways to describe the pictures on the board. This is some the basic vocabulary you could use for each row. Of course, you will have to make the adjectives agree and make sentences using verbs like hay, tiene, veo, es.

Link to Spanish 4th of July Game for Kids

You may also be interested in this post: Spanish 4th of July Activities – Photo Search and Word Search