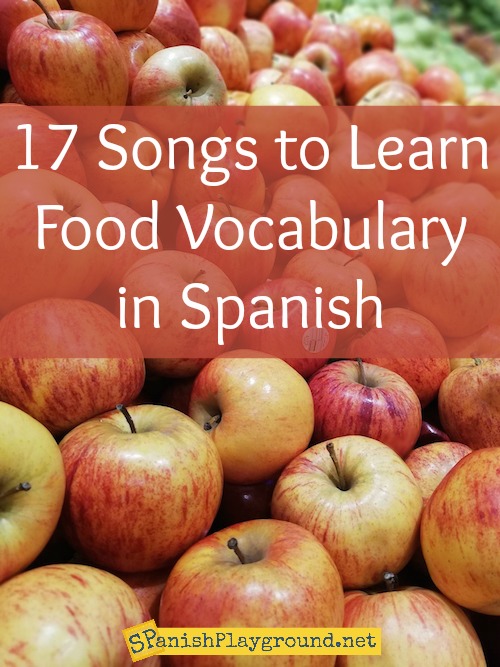 So, if you are teaching a food unit and want to include music, these 17 Spanish food songs are a great place to start.

Also, be sure to check out all our Spanish songs for kids grouped by vocabulary themes.

Many Spanish food songs focus on fruits and vegetables. Of course, we all want to encourage kids to eat well, and several of these songs focus on healthy eating. In addition, several include vocabulary about how plants grow.

This simple, fun song about fruit is also a dance. The song repeats the names of fruits adding a new fruit and action with each verse, and kids love the rhythm and movement. The chorus is simply Esto es el baile de la fruta (x 4).

The video starts with series of riddles about fruit, but you can move ahead to the song.

This is a catchy, very singable song. There is lots of repetition of common fruits, and the song also uses the related verbs comprar, lavar, cortar, and comer. The video is older than some of the other Spanish food songs, but my students enjoyed it. They really like singing the sections that repeat at a fast tempo!

This is a fun song with a great cultural component. Photos from Latin America and Spain are an excellent way to expand on Spanish food songs. There are excellent photos of fruteros online (do an image search with frutero vendedor so that you don’t get pictures of fruit bowls). Talk about the photos in conjunction with the song, naming the fruits you see.

This is just a clip, but you can find the song on iTunes and Amazon: El Frutero (the Fruit Vendor)

Rockalingua has a song, video, worksheet and picture dictionary for Las frutas and the verb gustar. You can find the free materials here: Las frutas. 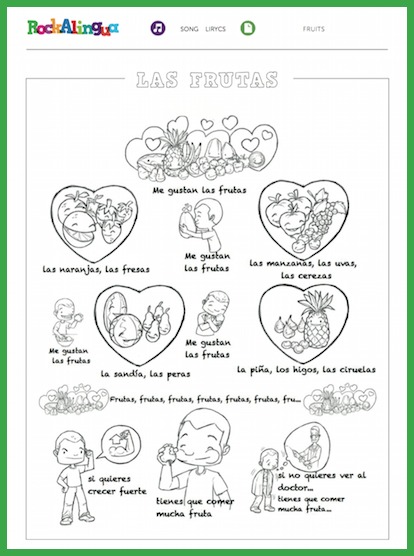 In this song, the vegetables sing about themselves. Like the fruit song by Doremila, it has more vocabulary, but again the words relate directly to each vegetable.

This is a series of 4 very clever Spanish food songs. They also teach the verb gustar. Kids love these songs because they are based on strange food combinations.

The comprehensible input in these videos is great, as they present each food separately and then combine them. The sequence of individual foods with clear images, and then the strange combination, with another image, makes these songs very effective for learning food vocabulary. These combinations are memorable!

This song also uses gustar to teach Spanish food vocabulary. It lists lots of foods with no me gusta. It is only jugo de naranja that merits a me gusta.

This version of the traditional rhyme is from the album ¡Come bien! All the songs on the album focus on healthy eating and fit well into themes on food and nutrition. You can find the album and all the great Spanish food songs on Amazon ¡Come Bien! Eat Right!

This catchy song lists lots of foods and divides them by meals.

This song has been around for decades, but it is still a hit in Spanish class. It has a catchy tune, and of course, kids love pizza!

These 2 Spanish food songs focus on the words cocinar and comida.

Kids learn the ingredients and process to make a cake with this fun chant.

With this song, kids learn the Spanish vocabulary for pizza ingredients.

Spanish Food Songs in the Classroom

Spanish food songs are a fun way to introduce vocabulary. You can combine them with actions and pictures, and they are a logical way to learn and reinforce the verb gustar. Of course, any food theme also lends itself to lots of fun taste testing!

Be sure to check out our list of 40 ways to use songs to teach Spanish and please share your own ideas in the comments below.