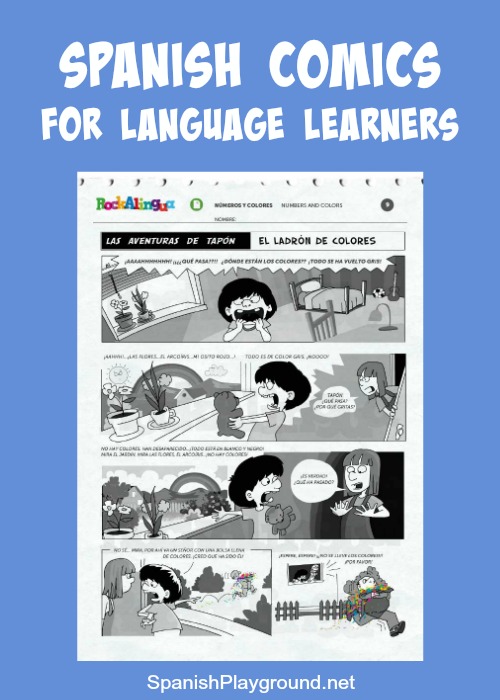 Rockalingua is now creating Spanish comics for language learners. In addition to print, they are making the comics available in a video format with native-speaker audio. This is a fabulous language learning resource!

Below you can read about why I like Spanish comics so much and see a few suggestions for using them in class. This is the first page of the first comic called El ladrón de colores. 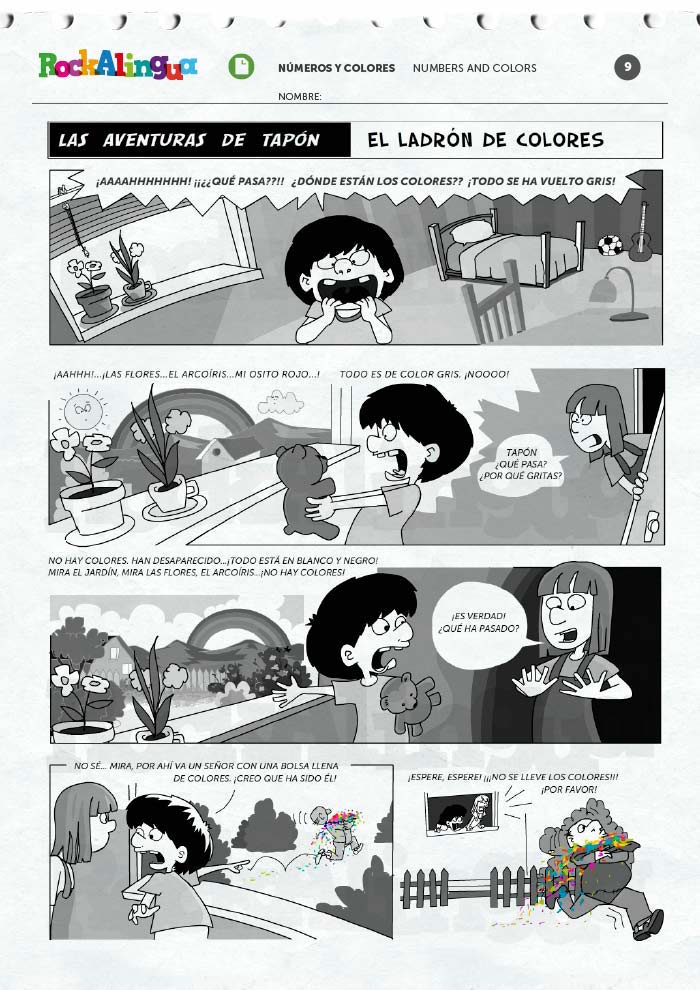 You can download a printable version of the first comic in this worksheet set. You will find other useful activities in the packet too.

Spanish comics break stories into small episodes, each with a small amount of text and a picture. Spanish learners have limited vocabularies, so they need this context to understand unfamiliar words. They use the pictures and the story line to deduce what makes sense and understand new language.

This is my favorite feature of Spanish comics! By definition, comics are constructed almost entirely of dialog, with almost no third-person narration. Why does this matter? First, dialog is easier to understand because there is less descriptive language. It is plot-focused and easier to follow. Next, kids read language they can use. In other words, it is speech, from the correct point of view and at the correct register – it is what people really say in a specific situation.

Because Spanish comics are dialog, they are perfect for reader’s theater and acting out in class. On a regular basis, I have readers asking where they can get reader’s theater, and now I will have a great a recommendation.

Suggestions
Have students read the comic as a readers theater or act it out.

The Spanish comics from Rockalingua are also available in video with excellent native speaker narration. The audio builds listening skills and helps students acquire natural rhythm and correct pronunciation. In addition, the expression in the voice over helps students understand the action of the story.

Suggestion
Use the video/audio to encourage independent reading. Students can listen and read along during center time.

Kids like comics and most kids will choose Spanish comics over a story with only a few pictures or a paragraph of text. The format of a comic is less intimidating and it breaks down the content into manageable pieces. The structure also allows for patterns and repetition, which are helpful to students. Do be aware however, that there is a lot of language in these Spanish comics.

These Spanish comics are coordinated with the other Rockalingua themes, so you will find songs, printable activities and online games to support the content.