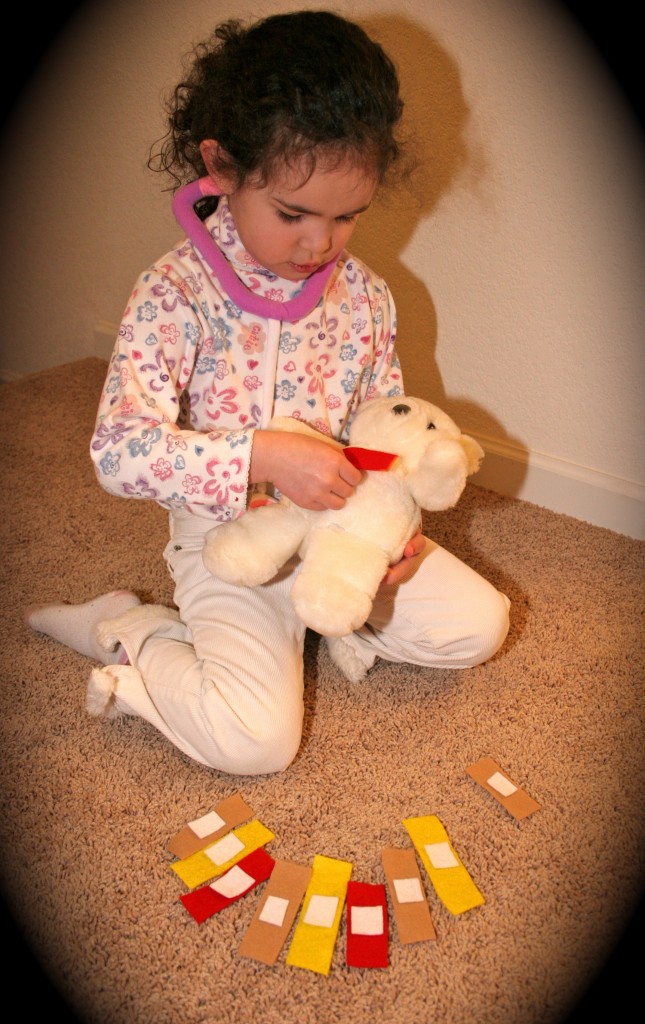 Preschoolers love imaginative play, so we do lots of it in my classes. One game that is always a big hit is when we pretend that our pets are hurt and need una curita, a band-aid. We practice Spanish body parts with this activity and I also teach the traditional saying Sana, sana colita de rana, si no sanas hoy, sanarás mañana.

All you need to play are felt band-aids and a stuffed animal for everyone. I make my curitas using different colored felt and a little two-sided tape. The felt will stick to the animals. The two-sided tape is to put the white square on so they look more like band-aids.

With some groups, I play using this simple rhyme:
– ¡Oh no!
– ¿Que pasó?
– Mi perrito (gatito, osito) se lastimó. Se lastimó la cabeza (la oreja, la nariz).
Then everyone puts a band-aid on their animal in the right place. Little ones who need help to complete the rhyme just put the curita on the animal where they want it and I help them say the word.

You can also add Sana, sana, colita de rana, si no sanas hoy, sanarás mañana. After you say where the animal is hurt, everyone rubs their animals in that spot saying the rhyme together.

Both of these rhymes help children produce Spanish as we play. Preschoolers and children in the early elementary grades often understand lots of language, but coming up with original sentences is complicated and takes time. They need to hear structures over and over to be able to produce them spontaneously. Fortunately rhymes, like songs, help children with this process.

In the first rhyme, children ask ¿Qué pasó? (What happened?).  This common question is an excellent example of the kind of structure that children can learn and apply as a complete sentence. They do not have to understand how the preterite tense is formed to use it correctly. In addition, learning the question will help them absorb how verbs are conjugated in that past tense and also that the preterite is used for completed actions. Those are important concepts from one little question!

Another advantage of including rhyme in this game is that it helps children acquire correct pronunciation. Kids mimic vowel sounds and the stress patterns and can reproduce them accurately with just a little practice. In this case, the accented final vowels in no, pasó and lastimó anchor the rhyme and children easily produce the sounds and the rhythm.

The second rhyme, sana sana colita de rana is traditional and used all over the Spanish-speaking world. When children are hurt, we say this rub the hurt spot. It is important to include cultural elements in language education, and rhymes and songs are one of the best ways to do that with beginner learners. Also, using the rhyme lets kids practice the Spanish body parts twice – once as they sana, sana colita de rana and rub the hurt place, and once as they put on the band-aid.

This is a very simple game, and kids hear and produce lots of Spanish as they play. We end the game by putting our animals to bed. They had a very eventful, accident-filled day! 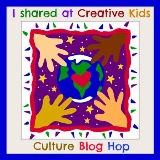 You may also be interested in this post: Spanish Body Parts for Beginners – A Video for Kids