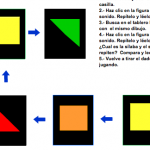 These two games with Spanish audio teach children pronunciation, animal vocabulary and letter sounds. They are from the site Leo lo que veo (I read what I see). The games were designed for native Spanish speakers, but work well with children learning Spanish. These games can be played by children of any age and any level.

Both games are structured as board games. Players roll a dice and move around the board. Each space has a shape that changes to show an animal and the word for that animal. When the player clicks the space there is Spanish audio that says the word. Players then find the other space with the same shape, click it to hear another animal, and identify the sound that is the same in both words.

Children who do not read yet can move around the board listening to the Spanish audio to hear the words for the animals. They can also match the shapes and hear the Spanish audio for both animals. Reinforce the vocabulary by repeating the words in simple sentences: Es una rana. (It’s a frog.) Veo el caballo. (I see the horse.) El conejo es bonito. (The rabbit is pretty.). Kids can also practice numbers in Spanish as they roll the dice and move around the board.

Children who are beginning to read can use this game to practice hearing and reading these common syllables. They can use the words under the pictures and match the sounds to the letters. They will also practice correct pronunciation by repeating the Spanish audio they hear.

Instructions for the online games with Spanish audio

These are the rules of the games and a translation. Adapt the game for the level and age of your child. Just listening and associating the word with the picture of the animal will introduce her to new vocabulary and the sounds of the Spanish.