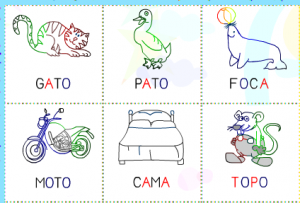 This online game with Spanish audio works well for language learners who are starting to read. It associates the sound of the word with a picture and also with the written word.

On each screen there are nine pictures with the word written under them. The Spanish audio automatically pronounces each word and the picture is highlighted. Then, the written words move to a numbered list on the right side of the screen. The audio pronounces a word, and the player chooses the number of the word (using the keyboard) she hears. If the answer is correct, the word moves back under the picture.

The Spanish audio in this game makes it a valuable pronunciation activity. Children hear native speakers pronounce the words. Encourage them to repeat the words when they hear them.

As they play, children will associate the correct Spanish sounds with the letters. For children learning to read in Spanish, this will reinforce the Spanish letter sounds without the influence of English.

The words in this game are very common, and that is one of the strengths of the activity. Even so, Spanish language learners will probably hear new vocabulary. The pictures will help them understand the words, but be sure to use them in sentences and to reinforce them in other situations. The words in this game do not have a context beyond the picture, so talk about them as much as possible. For example, on the first screen, the words are gato, pato, foca, moto, cama, topo, polo, mano, and pala. Talk about the words using simple sentences. For example, El gato…El gato dice miau. La pala…Tenemos una pala en la cochera (el garage). La mano…Ésta es mi mano (pointing to your hand). You can also relate the words to each other. For example, Hay cuatro animales. El gato, el pato, la foca y el topo son animales (There are four animals. The cat, the duck, the seal and the mole are animals.).

Use these steps to try the activity:
Click: Online game with Spanish audio
This will take you to a set of pictures that is a menu. Click on picture number 2, with a group of children in a circle.
On the next screen, click on Asocia, the first word in the menu.
Click on the arrow in the upper left hand corner to begin the game.
The activity will start automatically on the next screen. You can change between upper and lower case letters using the buttons in the upper left hand corner.

To play this game, kids have to use the number keyboard. A mouse or touch pad will not work.