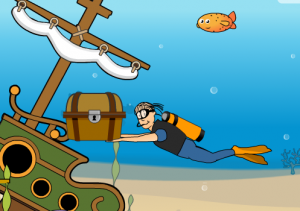 This free online game is the perfect first game for children starting to learn Spanish. Kids do not have to know any Spanish to play, and the Spanish audio makes it a wonderful introduction to the language.

Playing Las llaves del tesoro (Keys to the Treasure) children hear introductions, colors and other common vocabulary in a context that makes the language completely clear. They absorb the sounds of Spanish and soon understand the basic phrases and words used in the game. The vocabulary in this game corresponds to the words on the En mi casa CD by Singalingo, but it is basic Spanish and great for any child learning the language.

Use this link to Las llaves del tesoro – Online game with Spanish audio.

To begin the game, players choose a character. There are six options, and five of those are people who will introduce themselves in Spanish. The sixth is a monkey who introduces himself in monkey (something my son and husband thought was hilarious). There is Spanish audio and the text of the introductions also appears on the screen. Encourage children to click on the different characters and listen to all the introductions before they choose one. The more they listen, the more they learn.

Players also pick a color for the clothes of the character. The Spanish words are beside the colors and there is Spanish audio that pronounces each color word. Again, encourage kids to click on all the colors and listen before they choose what color the character will wear.

Choosing the character and the color, the context and images makes the Spanish perfectly clear. You do not have to translate anything for children playing this game. In fact, avoid relating the Spanish to English. Just let kids listen to the words and phrases and absorb the language. They do not have to repeat what they hear. At this point, they learn by listening.

To play the game, kids click just before the treasure chest to open it as it goes by. If the key reaches the chest it opens and an object comes out. The object is labeled with the Spanish word and the word is pronounced several times.

The game always lasts 1:30 and kids see how many times they can open the trunk in that time. Children will associate the Spanish audio with the objects, so there is no need to translate to English. Again, it is best to avoid translation when it is not necessary, and the images make the meaning of the Spanish words clear.

Kids learn by listening to the Spanish words as they play this game. Once they are familiar with the vocabulary, you can encourage them to repeat the words or to guess at what is in the chest. The vocabulary in the game is basic Spanish. Children will learn words like el sol (the sun), la luna (the moon), las estrellas (the stars), el plato(the plate), el tenedor (the fork), la cuchara (the spoon), el vaso ( the glass), el queso (the cheese), el pastel (the pie), los pantalones (the pants), and la camisa (the shirt). The words included in the this game reinforce the vocabulary on the En mi casa CD by Singalingo, but the game is excellent for any beginning Spanish learner.