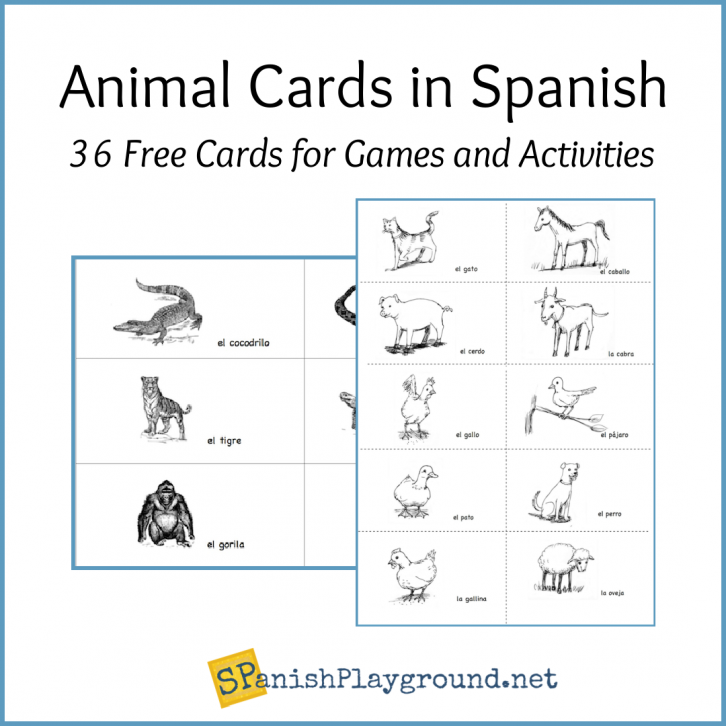 I love talking about animals with Spanish learners because the kids have so much to say. Picture cards make it easy to do different activities related to animals. Below you’ll find two free sets of Spanish animal cards that you can use for all kinds of games, language practice and creative fun.

– If the words are new, talk about the cards together before you play so children have a chance to hear them.

– When you play a game, limit the number of new words and include picture cards of familiar vocabulary.

– Use the words for the pictures on the cards as much as possible as you play.

– Relate the words to each other as you play. You could say, for example, Un caballo corre más rápido que una vaca.

This set of cards has 12 common farm animals. There are cards with and without text, sets of different sizes, and also full-page coloring sheets.

In addition, I included syllable cards for these cards because I use them a lot with beginning readers. Students are often familiar with animal vocabulary, so it’s a great place to start to read.

Like most of the other picture cards I use with students, these are black and white. They are less expensive to print, and I can make coloring the cards an additional language activity.

I have a less elaborate set of Spanish animal cards for wild animals.  I don’t use this card set as often, so I haven’t needed different sizes or the syllables.

There are an endless number of activities you can do with picture cards. Here are a few ideas to get you started, and you undoubtedly find more ways to play and learn.

Do you have other ways to use picture cards to learn animals or other vocabulary? We’re always looking for new activities to help kids learn Spanish, so please share in the comments.