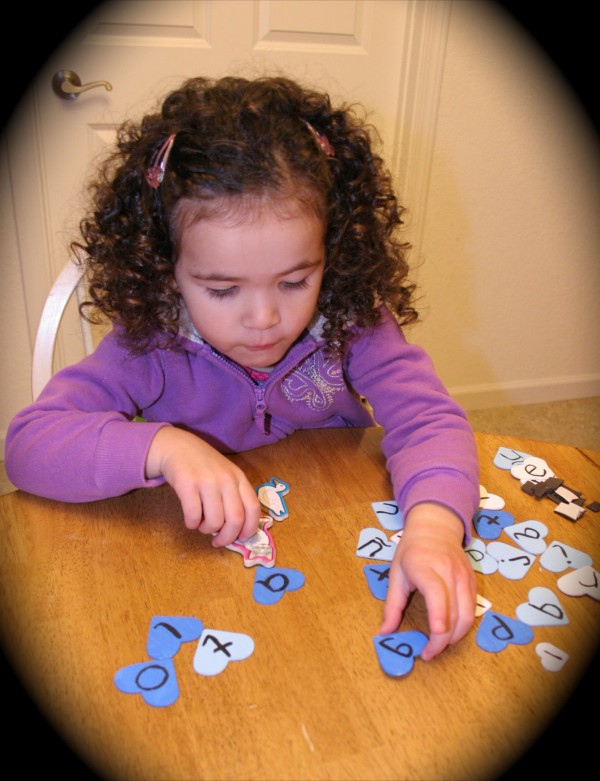 When we introduce the letter names and letter sounds to beginning Spanish learners, we associate the sounds with words. Learning the letter sounds is not difficult for kids, although they do have to separate them from the English sound system. Often, Spanish alphabet activities are principally vocabulary activities for Spanish language learners. I have attached a free printable with pictures that represent each letter of the Spanish alphabet. You will find the link at the end of the post.

There are lots of options for making Spanish letter sets if you can not find magnetic or foam letters that have the ñ. You can make cards, or paint the letters on stones or wooden shapes from a craft store. Shapes like the hearts in the photos are inexpensive and light. Add a little magnetic tape and you have a set to use on the refrigerator.

Children learning Spanish have limited vocabularies, so it is important to use objects and pictures to support the words you use to represent the Spanish letter sounds. The following activities all match objects or pictures to letters. The difference in the activities is how children find and arrange the objects. It is worth doing a variety of activities using the same set of words because it is the process of thinking about the sound and the word and then relating them that cements the letter sound, the letter name and the vocabulary.

I love activities that use objects to represent the letter sounds. You can find items around the house or classroom that work for most of the letters. There are some that are trickier, like the k and the w. There are fewer words that begin with these letters because they do not occur naturally in Spanish; the words are taken from other languages.  I use pictures for words I cannot find objects for, and some activities below require pictures for all the letters. I have attached a printable with a few pictures for each letter of the alphabet.  A list of additional common words follows the pictures, and you will able to think of many others.

In Spanish, the alphabet is el abecedario or el alfabeto. The letters are feminine: la E, la T. This is because the word letra is feminine – la letra T. These are a few phrases that you will use as you talk about letters and words with kids learning Spanish:

Follow the links for great pictures of these activities.

1. Make alphabet jars. Label containers with a letter and put items that start with that letter in the jar.

2. – Make an alphabet museum of found objects. I love this idea because as children learning Spanish acquire new vocabulary, they can add the object to the museum.  For Spanish language learners, once an object is in the museum, the letter sound serves as reminder of the vocabulary. For native Spanish speakers, the object and the familiar word serve as a reminder of the letter sound.

3. Make a letter circle. – In the photo, kids are matching letters to letters. You can do the same activity matching pictures and objects to the letters.

4. Have an alphabet scavenger hunt. For this activity, kids are looking for objects that start with specific sounds, so they need to have more vocabulary. You can also do the activity together and help them by naming items as you search. They listen for the sound that matches the letter. For kids who have more vocabulary, this post describes a version of an alphabet scavenger hunt race.

5. Make an alphabet sticker match. This is a good activity because you can hang the poster and talk about it when you are done. It is unlikely that you have stickers for all the letters, but you can print the pictures I have included below, or your own, on sticker paper.

6. Make a letter lotería (bingo) game. Put letters on the game boards. There are lots of free bingo generators online, but one of my favorites is at Lanternfish.  For kids who are able to hear and identify the letter sounds, you can call out the word and hold up an object or picture. For children who are learning their letter sounds, you can also hold up the visual cue and say the letter: T de tigre or P de pez.

7. Make a refrigerator magnet picture set by printing the attached pictures, or your own, on magnetic paper. Add magnetic letters and kids can match the letters and pictures.

8. Play card games. Make letter cards the same size as the pictures and match the cards. Once kids know the words, play memory by matching letters and pictures. Remember to play with just a few cards at a time if the vocabulary is new.

9. Dig for treasure. Kids love searching for things. If you have plastic toys to represent words, bury them in dirt or hide them in shredded paper. When kids find an object, they match it to a letter. You can also hide foam or magnetic letters and they can match the letter to the correct object.

Pictures for Letters of the Spanish Alphabet

You may also be interested in this post: Printable Spanish Clothespin Activities for Numbers, Vowels and Math