Song about a house teaches tener and other Spanish verbs 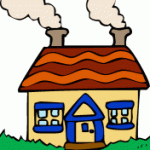 This song uses the verb tener, and other useful verbs, in the first person. This verb form, the yo form, is one of the first children learn and it lets them talk about what they do. Through actions, the song also teaches a common meaning of así – “this way”, or “like this” – as the children show how big the house is, how the smoke comes out of the chimney, how they knock on the door, and how they clean their shoes to go in.

Yo tengo una casita que es así y así – Measure the size of the house with your hands.  It is small for the first verse, bigger for second, and much bigger for the third verse.

Que cuando quiero entrar, yo golpeo así, así. – Make a knocking motion to show how you knock on the door. Make it a small knock the first time, a bigger knock for the middle-sized house, and a big knock for the big house.

Me limpio los zapatos así, así, así.  – Make the motion with your feet of cleaning your shoes. Make the motion small for the small house and make it a bigger motion each time.

There are several versions of this song.  Some use llamo or toco instead of golpeo. This is a reasonable change because golpeo is “I bang” on the door, and llamo or toco is “I knock.” Other versions use lustro los zapatos (I shine my shoes) instead of limpio, and so the action is shining shoes rather than cleaning them to go into the house.  In the version below, that line is me rasco las rodillas ( I scratch my knees) You can see lots of versions done in grade schools in Latin America and Spain by seaching Tengo una casita on YouTube.

These are the lyrics to the version that I teach, but any of them are fun to sing and teach useful Spanish verbs. I have included a translation too.

You can hear the tune to the song by clicking here: Yo tengo una casita

Yo tengo una casita / I have a house

Que por la chimenea / That out of the chimney

Que cuando quiero entrar, / That when I want to go in,

Me limpio los zapatos / I clean my shoes