Saco una manito (I take out one hand) is one of the first songs that many Spanish-speaking children learn. Even before they can talk, very small children do the hand motions as their parents sing this song.  In Mexico and Spain, the diminutive of la mano (hand) is la manita.  In those countries, the song uses la manita instead of la manito.

I teach this song early in my classes because it helps children learn the first person singular of the common verbs, sacar (to take out), hacer (to make), abrir (to open), cerrar (to close), and volver (to return).  These verbs, and the infinitive guardar (to put away), are combined with actions that make their meanings clear.  Also, combining movement with language is one of the most effective ways to learn.  When the Spanish they are learning is combined with movement, children process the sound of the word and the meaning at a deeper level.

In addition to the verbs, this simple song gives children practice using una with mano. La mano is a common exception to the normal pattern that nouns that end in “o” are masculine. The fact that mano is feminine is reinforced in the song when the children sing las hago bailar, las abro, las cierro and las vuelvo a guardar.  The direct object pronoun las means “them” and refers to manos. This repetition of las, as the children use their hands, cements the gender of the noun in their minds.

There are many versions of this traditional song available.  My favorite version is the one sung by Adriana Szusterman on her CD Cantando con Adriana Vol. 2. Adriana is from Argentina and is one of the most popular children’s artists in Latin America.   You can hear her version of Saco una manito in these videos of children singing.  In these videos, the song is followed by two other songs about hands –  A mis manos and Si yo pongo.  Both of these songs are great for children learning Spanish. In particular, Si yo pongo teaches arriba (up) and abajo (down) by associating them with cielo (sky) and suelo (ground).  All of these songs are on the CD. The Spanish lyrics and a translation follow the videos.

Children at preschool singing songs about hands in Spanish.

Saco una manito. La hago bailar, / I take out one hand. I make it dance.
La cierro, la abro y la vuelvo a guardar. / I close it, I open it, and I put it away again.

Saco otra manito. La hago bailar, / I take out the other hand. I make it dance.
La cierro, la abro y la vuelvo a guardar. / I close it, I open it, and I put it away again.

Saco las dos manitos. Las hago bailar, / I take out two hands. I make them dance.
Las cierro, las abro y las vuelvo a guardar. / I close them, I open them, and I put them away again. 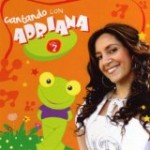 In addition to Saco una manito,  Cantando con Adriana Vol. 2 also has the songs A mis manos, Si yo pongo, Michu, Michu (about a cat named Michu), and Al agua pato, which are all excellent for Spanish-language learners.  The other songs on the CD are also lots of fun and kids love them (in particular the song El sapo Pepe). Some of the songs are longer, so I have not used them in classes, but they are perfect for at home or in the car. The tunes are catchy, and the lyrics to the songs are available online. It is very important for children to hear natural, correct Spanish. Music like this is one of the best and easiest ways to expose children to native-speaker Spanish.