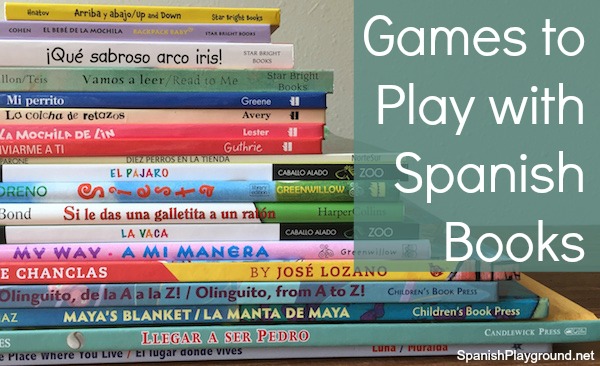 Playing reading games encourages kids to use Spanish and think about what they have read. These 6 games are easy to play and can be adapted to different books. Several are based on classic games, but narrow the focus to a book to make the game manageable and to strengthen language skills. Play these reading games to keep kids motivated and having fun with the Spanish books they read this summer.

When someone forgets what comes next, makes a mistake or cannot think of something to add, that person is out of the game. This game is fun with two players, and you can play anywhere using familiar stories.

Veo, veo is I Spy in English. Playing Veo, veo with the illustrations in a book is a quick, fun way to practice a range of vocabulary.

The traditional game of Veo, veo starts with a rhyme. You can find a detailed explanation of the different versions here. For the purposes of playing with pictures from stories, this short version works well:

Player A – Veo una cosita.
Player B – ¿De qué color es?
Player A – Es de color….
Player B – tries to guess the object in the picture.

This game is played like the traditional game Hangman, except that you build a snowman. Each time a player guesses an incorrect letter, you add something to the snowman (three balls of snow, two arms, parts of the face, hat, scarf, broom, etc).

One player chooses a key word from the story and makes a blank for each letter. The other player guesses letters and tries to guess the word. Be sure to talk to kids about guessing vowels first, about how many vowels they can expect based on the length of the word, and about common letter combinations.

Play 20 Questions with items and characters in the book. This is a wonderful game to practice vocabulary, categories, question formation and logic. To play, one player thinks of something in the story. She tells the other players if it is a character, place or thing. The other players ask yes-no questions to determine what she has chosen. They have 20 questions to guess what it is.

Be sure to talk to kids about starting with general questions and then asking about more specific details. You can model this by being the player who guesses the first few times you play. The game is much more fun if they learn to not guess randomly.

In this game, one player chooses something from the book and others list as many questions as possible that can be answered with that object or person. This is an excellent review of question words because kids have to think about the nature of the word to determine what questions to ask. They also have to think about what happens in the story.

A Word About Reading Games and New Vocabulary

The games listed above are fun to play with familiar vocabulary. They are also a good way to practice new words. If you are going to include new vocabulary however, it is best to provide support so kids don’t get frustrated.

The easiest way to support readers as you play these games is to make a list of words from the book and use them as a word bank to play the game. You can put the vocabulary on cards and add pictures if you like. Talk about the story using the words before you start and have the words handy when you play.