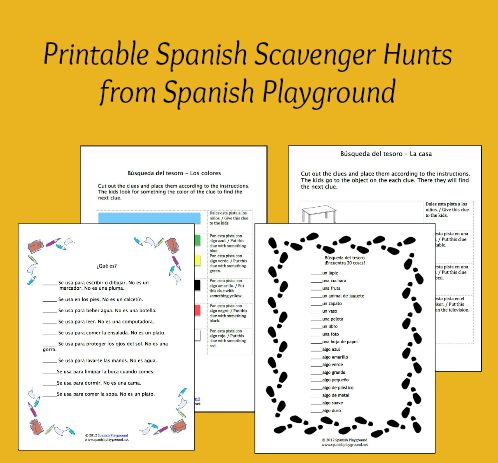 Kids love treasure hunts, the games where each clue leads to another clue and eventually to treasure. They also have fun with scavenger hunts, where they have a list of things to find. The term Búsqueda del tesoro is used for both activities in Spanish and they can be excellent language activities for kids learning Spanish. I attached a few of my hunts at the end of the post, but you can easily make your own.

Treasure and scavenger hunts can done inside or outside, and there are many different kinds of hunts and pistas (clues). Lots of hunts can be adapted to language learning. They can also be designed for children who read or do not read yet. A online search will turn up a variety of websites and books with suggestions for having successful hunts. Regardless of the kind of hunt, here are a few suggestions for structuring a Spanish game for language learners.

– Use familiar Spanish vocabulary. Hunts are an excellent way to reenter vocabulary that children have been introduced to. If kids are looking for something that they do not know the Spanish word for, they will need more support – a picture and an adult who repeatedly uses the new word as they search for the object. As a general rule, children should hunt for objects they can recognize the Spanish word for.

Unfortunately, using familiar Spanish vocabulary changes the nature of a scavenger hunt. If kids are using their first language, it is perfectly reasonable to have them find a ribbon or a toothpick. With kids learning Spanish, I focus on general, useful vocabulary, so these are not words they know. You can specifying the color of some objects to make them harder to find, like a black sock or a red crayon. With older kids, you can also have them search larger spaces (a neighborhood, a zoo, a park) and use a digital camera to take pictures of what they find. This increases the options for items to search for. You can include things like un camión azul, and una flor amarilla.

– Keep the kids together. Hunts can be organized for one group, several small groups, or individuals. To provide support and reinforce the language it is easier to have kids hunt as one group. I am lucky to work with small groups. With familiar vocabulary, small groups or pairs do well too, depending on the age of the children. Because I want my students to say what they are looking for or read clues aloud, I have kids search in at least pairs rather than individually.

– Provide a key Spanish phrase. Before you start, teach or review a phrase that you will use throughout the hunt. For example Ahora bucamos … (Now we’re looking for), Tenemos que encontrar… (We have to find), Necesitamos… (We need), or Vamos al / a la (We going to the…) The phrase will depend on the hunt, but it is a good way to keep kids speaking Spanish as they get more excited.

– Repeat key words. Use the key words (the object you are looking for or key words in the clue) over and over. The kids will be busy moving and looking once they know what they are searching for or where they are going. Speak lots of Spanish to relate their activity to the language. This is especially important for kids who do not read and are using picture clues.

– Use pictures. With picture clues, treasure hunts and scavenger hunts can be great activities for children who do not read yet. If you want more complicated clues, you can read them aloud and it is a good listening activity.

– Review when you are done. When kids have finished a scavenger hunt, go through the whole collection of objects as a group to review and reinforce the words. With little ones, you can give every child a object and when you call off the word they can stand up and repeat it.

Treasure hunts and scavenger hunts have to be adapted to different locations and students. The vocabulary will vary with what kids know and what is available to search for. Clues can be very simple or more complicated, depending on the level of the kids.  For example, all four of these are possible clues for vaso:

I have attached several of my scavenger and treasure hunts for you to print and use or adapt to your needs.

Learn Spanish hunts with picture clues:
1. Learn Spanish treasure hunt – Los colores (can be done in a classroom or at home)

3. Learn Spanish scavenger hunt – Encuentra estas cosas (a hunt for things found in most households)  This PDF has 2 versions. One with only the picture clues and one with labeled picture clues.

You may be interested in:
Spanish game – Printable cootie-catchers