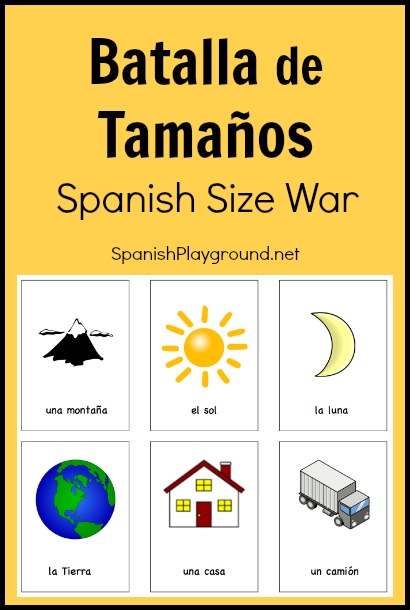 This Spanish card game is a fun way for kids to learn vocabulary and practice comparisons. It is based on the traditional game “War,” in which players each have a stack of cards and turn one over at the same time.

In the traditional game, the higher number wins and takes the other card. In this version, one of the cards wins based on the size of whatever is in the picture on the card.

How to Play Batalla de Tamaños

Players decide before they start if bigger or smaller is going to win. Like the traditional game, if the cards have the same picture, players put three cards face down and then another card face up. The bigger (or smaller if that is how you are playing) card takes all of the others.

There are twelve cards. To play, you will need to print 4 sets of cards on card stock and cut them apart for a total of 48 cards. Mix the cards thoroughly and deal 24 to each player. You can play with more people, but you will want to print additional cards. The link to the printable PDF is at the end of this post.

Depending on the age of the players and their level of Spanish, before you begin, you may want to line up the 12 cards in order and say the words on the cards together.

Vocabulary in the Spanish Size Game

These are the words on the cards in order from largest to smallest:
el sol – the sun
la Tierra – the Earth
la luna – the moon
una montaña – a mountain
una casa – a house
un camión – a truck
un carro – a car
un caballo – a horse
un perro – a dog
un conejo – a rabbit
un ratón – a mouse
una hormiga – an ant

These are examples of sentences players will use as they play Batalla de Tamaños. Again, players need to decide before they start if larger or smaller is going to win.

You can add additional cards to Batalla de Tamaños. Just be sure to choose words that clearly fit in the size hierarchy. For example, you could add Júpiter (Jupiter) and abeja (bee) with no confusion. Of course, these cards can also be used to play Memory and other games.

Get the Batalla de Tamaños Cards

Do you have favorite card games in Spanish to play in class or at home? We would love to discover more, so please share in the comments below.