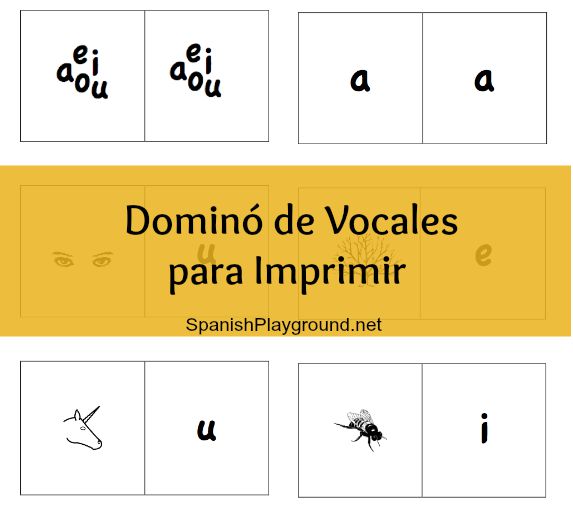 I made this game recently to play with several of my private students who are learning to read, but it would work with any age or level learning vowel sounds or as pronunciation practice. It is a basic domino game where players match vowels to vowels and vowels to pictures that start with the sound. I use card stock for this printable Spanish game, but you can laminate your dominoes if you want them to last longer. You will find the link to the PDF at the end of this post.

This is how you play:
– Mix up the dominoes and place them all face down on the table.
– For a two player game, each player should draw 4 dominoes. For a game with more players, each player should draw 3 dominoes. Players should not let other players see their dominoes.
– One player begins by laying any domino on the table.
– The next player plays a domino that matches what is on the table. She can match letter – letter, letter-image, or image-image (the images have to start with the same vowel sound). A double domino is played horizontally and starts a new row. If a player does not have a domino that she can play, she draws a domino from the pile and misses her turn.
– The object of the game is to get rid of all your dominoes. Keep playing until someone has no dominoes left or until no one can play. If no one can play, the person with the fewest dominoes wins.

Be sure the children know the vocabulary for the images before you start to play. Even if they know the words, it is a good idea to review and talk about the vowel sounds.

Spanish Songs for Kids: Patito, patito from Music with Sara
Teach Spanish to Children - Embedded Readings are a Technique with a Future