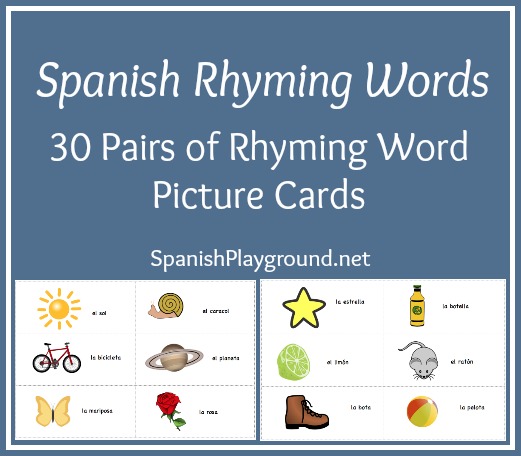 These two sets of printable Spanish cards have pictures of words that rhyme. There are thirty pairs, sixty words in all. The cards can be used in lots of different ways. I made them without text for a group of preschoolers and added text for a mixed age group. You can download and print both sets using the links below.

Rhyming is an important pre-literacy skill and an ability that should be developed in children learning Spanish. It demonstrates a child’s awareness of the sounds of the language and builds the foundation for decoding and encoding (spelling) words. Also, rhyme plays with the sounds of language; it is fun for Spanish learners of any age.

Tips for playing with rhyming cards
– Use just a few pairs at first.
– Choose words that are familiar to your child.
– Say the words for your child as you play so she can hear the rhyme.

Games to play with rhyming cards
– Children match pairs of words that rhyme.
– Put out three cards, two that rhyme and one that does not. Children identify the two rhyming words.
– Place one half of the rhyming cards face down in the center. Deal out the other cards. Turn over a card in the center and players look through their cards to find a match.
– Make a silly sentence with two rhyming words. The sentence can be very simple and you should use the same structure several times. For example, with the pattern En el/la _____, hay un/una _____ you will get some sentences that make sense and some that are silly. Make a quick drawing of particularly silly images to get kids laughing. This sentence works well because it creates a mental image right away.

All of the words on these cards are nouns, except for the very last word, where I made a pair of hoja and roja. I think I was getting tired. Roja is an adjective and when we play with the card I say pintura roja or gota roja (the picture is of red paint drops) to give it a context. It does not really fit the set, so you might just want to take that pair out.