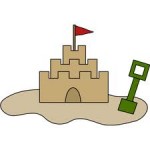 I am always on the look out for pictures to use to teach Spanish to children. Ideally, the pictures are scenes of common situations with several people. They need to have enough detail to provide a context for what we say and to help kids practice common Spanish vocabulary and different structures. It is great if they can be printed, copied and colored. I use pictures like these for lots of activities, from games to conversation activities to writing prompts.

These printable story papers from Activity Village are designed to encourage children to tell a story. The pictures set a scene and the children are supposed to use their imagination to tell what the people are doing there and what happens next. Clearly, moving to hypothetical scenarios is too difficult for beginning learners, but many of the pictures have enough detail to be valuable Spanish language tools. With children learning Spanish, it is important to stay focused on what is in the picture, so that you can point to objects to clarify what you are saying.

This site has a big collection of story papers. Some have more detail than others, and I find those most useful with children. I have listed a few of the more detailed pictures below. Color the pictures together or play this dice game. Remember, just talking about the pictures with simple sentences is a good way to speak Spanish with your child. These example sentences are based on the beach scene: