Poems for Children in Spanish: Edgar Allan Garcia and Sergio Andricaín in Cuatrogatos 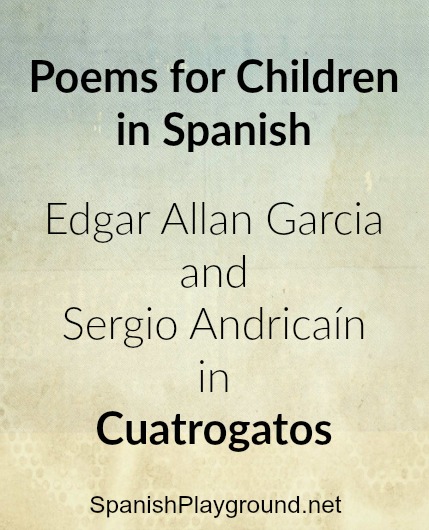 Poems for children in Spanish teach language and culture through rhythm, rhyme and images.  Simple structures and familiar vocabulary make these three poems from Cuatrogatos easy to use with language learners.

The online magazine, Cuatrogatos, is dedicated to children’s literature in Spanish. It is based in Miami and is an excellent resource for poetry to use with kids. The archives have material going back to 2000. Both Edgar Allan García of Ecuador and Sergio Andricaín of Cuba are well-known contemporary writers whose Spanish poems for children appear in Cuatrogatos.

I choose the poems I use with children learning Spanish carefully. I look for short works, with clear, concrete images or situations that children can easily imagine.

Although teaching a poem usually means teaching some new vocabulary, I try to choose poems that use as many familiar words as possible. I also look for poems that create an image children can draw. My students enjoy illustrating the poetry and drawing provides many ways to work with the language.

One of my favorite poems for children in Spanish is called ¿Quíen da más? by Edgar Allan García. A well-known author from Ecuador, Edgar Allan Garcia has won many national and international awards, including Ecuador’s Premio Nacional de Literatura Infantil three times. This poem appears in Cuatrogatos.

¿Quíen da más? is a wonderful poem to use with Spanish language learners because it is based on animals (oveja, pato, gallo, and vaca), the sounds they make in Spanish and numbers. The scene is an auction – subasta is word that you probably have to teach, but it may be the only. Guess which animal ends up with the sun?

Sergio Andricaín is a Cuban poet. He lives in Miami and is one of the founders of Cuatrogatos. The two poems I mention below are from his book Libro secreto de los duendes. You can find several books by Sergio Andricaín on Amazon, and they are also available from other sellers.

La pradera de los unicornios is a lovely poem that puts into words the fantasy of many children. It is about a grassland at the edge of the world where there is a unicorn for everyone. The vocabulary is appropriate for children learning Spanish, and the images in the poem are ones that children will relish and carry with them.

Balada del dragón viajero is a very short poem in the form of a conversation between a child and a dragon. The dragon brings his friendship, but he is a dragón viajero and is soon on his way. Again the language is straightforward, well within the reach of Spanish language learners. The encounter is told in just a few words, so children imagine the child and the dragon as they like.

Both of these poems stir the imagination of children by sketching interactions with magical beasts. The simple language creates a world of possibility in just a few lines.