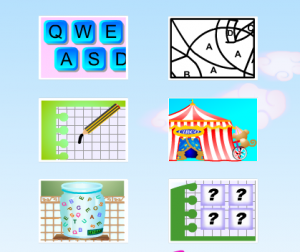 These online Spanish games to teach letters are from the Ministerio de Educación of Spain. They are part of a set of activities for children that include games about numbers, the body and the natural world. The letter games are useful for Spanish language learners because they have native speaker audio, so kids learn the letter names and sounds. The activities use the letters in words and include a picture of the word, so children also learn vocabulary.

The link above will open the main menu. Click on Letras or the letter blocks. Of the six icons on the letters menu, four activities have audio and are most useful for children learning Spanish. When you click on each icon, there are audio instructions in Spanish. If your child is just beginning to learn Spanish, she can listen for the word letras.

Keyboard icon
In this activity, kids use the keyboard and type any letter. When they do, they see the letter, hear it pronounced, hear a word that starts with the letter and see an image of the word. The vocabulary is common and the pictures are easy to identify so kids will know what the words mean. Unless you have your keyboard configured for Spanish, the ñ will not work.

Many of the words from this first activity are used in the other activities. Because kids can hear the word, see the picture and see the written word by just typing a letter, it is great way to learn the vocabulary for the other games.

Circus tent icon
In this activity, players hear ¿Qué letras faltan? (What letters are missing?). The screen shows a picture and a word. The word is missing one letter. Players are given three letters and drag and drop one into the word. When players click on the letter to drag it, they hear it pronounced. The words are abeja, india, flor, naranja, cohete, and estrella.

Letters in a jar icon
Kids see a picture and hear the word in this online Spanish game. The task is to click on the letters floating in the jar to spell the word.  The words in this activity are gato, tortuga, naranja, and huevo.

Squares with question marks icon
In this memory game, players match a word to the picture. The words are rana, pez, queso, ojo, oveja, silla, perro and pelota.

The other two letter activities are paint by letter and letter tracing. The paint by letter game does not have audio, but it can be a good language activity if you play with your child and talk about the letters and colors.

The letter tracing activity teaches the shape of the upper and lower case vowels. Children see the letter drawn, and then trace the letter. In my experience it is hard for children to trace with a touchpad or mouse, but the game does pronounce the vowels when you click on them.

These games are short and simple to play. They are an easy way for children to hear native speaker Spanish and practice the names and sounds of letters.

You may also be interested in this post: Spanish Audio – Online Game Associates Sound, Picture and Written Word