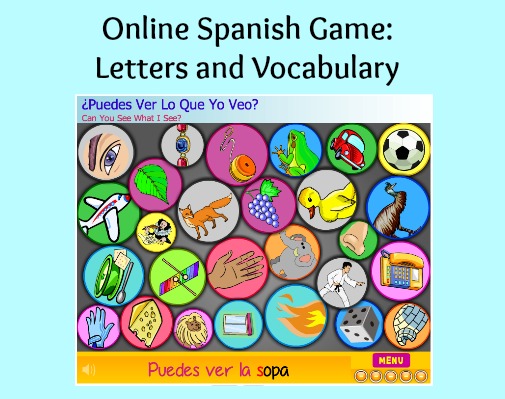 OnlineFreeSpanish has a game called ¿Puedes ver lo que yo veo? It is a searching game, and kids love looking for things!

This game works well to learn or review letters and a selection of vocabulary associated with initial sounds. This free online Spanish game is based on the traditional game Veo, veo, the equivalent of I spy in English. To play Veo, veo, one player chooses an object they can see and the other player looks around and guesses what is it. Sometimes the first player give the initial letter as a hint.

Check out more Veo, veo games and see our resource page for all our Spanish games for kids.

In the online Spanish game ¿Puedes ver lo que yo veo?, kids are given a set of pictures and they look for one based on the clue they hear. They can choose to play with words or letters. If they play with words, it is easier and they will hear the name of the object. If they play with letters, they have to know all the vocabulary well because they are searching a set of pictures and have to be able to eliminate the ones that do not start with the letter.

The answers are also presented in complete sentences: Esta es la sopa. This gives players repeated exposure to the verb form es and the pronouns este and esta. Kids hear the agreement of the pronouns with the noun over and over and it helps them absorb the deeper structure of Spanish.

Of course, it help learning that the words are associated with pictures, Spanish text and Spanish audio rather than the English word.

In addition, OnlineFreeSpanish has a Picture Dictionary with printable pictures of vocabulary for each letter. You can use these pictures to play the same game offline and to do other activities with the words.