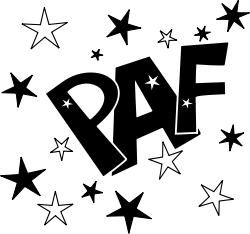 I have used activities with comic strips in Spanish and ESL classes with lots of success. Kids love them, and comics lend themselves to all kinds of language activities. Many of you are already familiar with MakeBeliefsComix.com, but if you have not taken a look, the website has a wonderful tool for letting kids create comic strips online. The comics they make can be printed or emailed. The site also has printable blank templates where kids add text to a comic.

Comic strips work well with children learning Spanish for several reasons.
– The graphics support the language and create a context with a setting, objects, and characters who show emotion and action.
– The language in comic strips is almost all dialog. Objects are mentioned, but there is very little description.
-The language in comics is spoken language. This is often something I want to focus on in class. (l love plays and reader’s theater for the same reason.)
– Comics are short. Many kids find it is less intimidating to fill dialog balloons than to write a paragraph of text.
– You can use comic strips with many ages and levels.
– Comic strips can be used in many different ways. For example, you can give kids:

– panels with the dialog to put in order.
– the complete strip and the phrases for them to order in the dialog balloons.
– the strip with half of the dialog written and let them create the other half.
– vocabulary words and ask them to use them in a comic strip.
– a setting or a problem and have them create a comic strip.
– a specific grammar concept that you would like them to focus on. For example, to practice direct object pronouns, ask children to make a strip with an object, but to only refer to it once as a noun (anywhere in the strip). In the rest of the dialog, the object will be represented by the pronoun. Comic strips also work well to practice comparisons, narration in any tense, and other grammar points.

One easy way to use MakeBeliefsComix is by taking advantage of their printable blank templates. They have other great printables too, but these do have some text in English, usually to establish a setting, explain a task or give instructions. The text is minimal on many of the activities though, and they can easily be adapted to use with Spanish language learners.

It is amazingly easy to make comic strips online on MakeBeliefsComix. Kids can make their own strips, or teachers and parents can generate strips for different activities. The site accepts international characters from my Mac and also has a help section dedicated to international characters. There are also lots of suggestions for using MakeBeliefsComix in the classroom.

You may also be interested in this post: 7 Fun Free Websites to Keep Kids Reading in Spanish