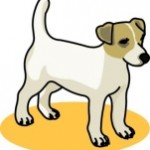 Escoge una mascota (choose a pet) is an interactive online activity that exposes children to lots of Spanish vocabulary and grammar.

This activity teaches the structure of gustar, animals in Spanish, and also uses four very common Spanish verbs: correr (to run), nadar (to swim), buscar (to look for) and jugar (to play).

The game consists of the question ¿A cuál mascota le gusta…? (Which pet likes to). Then, it asks about an activity that an animal might do. Children choose the answer from a set of three animals.

This activity teaches Spanish animal vocabulary in a couple of ways. You hear the name of each animal in Spanish when you mouse over the picture.  Also, the answer to the question shows one animal playing and uses the Spanish word for that animal in a simple sentence.

Children also practice with the meaning of the common verbs correr, nadar, buscar and jugar with this activity. These verbs are used to ask what the pet likes to do something. For example, the first question is  ¿A cuál mascota le gusta correr en una rueda? (Which pet likes to run in a wheel?). The options for answers are a turtle, a fish and a hamster.

If you do this activity with your child, help her focus on the verb.  You can do this by repeating le gusta correr.  If the verb correr is new for your child, act it out. Fish and turtles do not run, so when she understands the Spanish verb, she will choose the hamster. If she clicks on the wrong animal, it will simply ask her to try again.  When she clicks on the correct answer there is visual support for the meaning of the verb and the rest of the sentence. – you see the hamster run on a wheel or the cat play with string.

This activity also reinforces the structure of gustar.  The questions use the singular pronoun le – ¿A cual le gusta (Which pet likes)? The answers use the plural pronoun les – A los perros les gusta (Dogs like).

This is a good example of how a short, simple activity can be an effective Spanish language learning tool. It has audio that models correct Spanish pronunciation and lets children practice listening.  It has repetition of key Spanish vocabulary and Spanish grammar structures. The images make the meaning of the Spanish clear, and it actively engages the child with the language.

Click the link to do this Online Activity with Gustar and Spanish animal vocabulary.