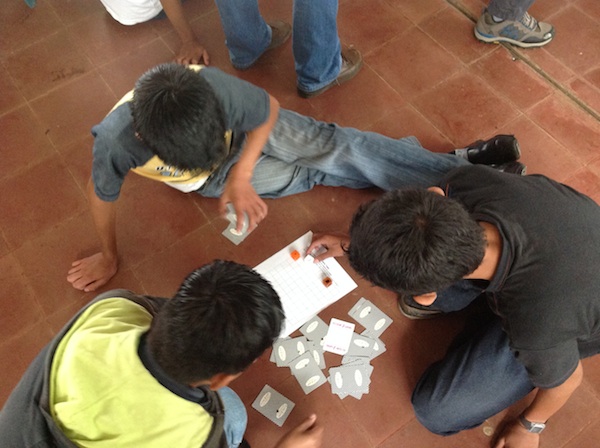 I’m still in Nicaragua doing workshops, so this post is going to be really short. As a part of one of our workshops, the boys in the picture played a math game to practice addition. It is one of the suggestions for this week’s Friday Five.  These no-prep Spanish activities are an easy way to keep kids engaged with the language.

1. Play a board game to practice addition. Make a game board with 100 squares on a sheet of paper. Use playing cards 2-10 from a deck of cards. Place the cards face down. Players take turns drawing two cards, adding them together, and moving that many spaces. Say the addition problems in Spanish like this: Tres más cinco, ocho.  The first player to 100 wins.

2. Listen to and then sing Nacemos libres. It is a loose translation of Born Free by Douglas Wright. The version in Spanish has lots of words from the natural world including viento, mundo, estrellas, cielo, mar, marea. Follow the link above to find the words and the mp3 on El jardín de Douglas.

3. Watch a short video and play games on the PBS website Oh Noah.  The games are meant to teach Spanish to kids six to eight years old.

4. Print and play dominoes with vowels. The game matches vowels to words that start with the letter.

5. Listen to and sing Yo solito. It is about a child who wants to do things by herself. The words are on the screen.