Kids learn letters in Spanish with game from OnlineFreeSpanish 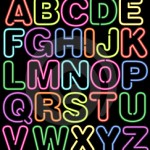 The website OnlineFreeSpanish.com has lots of entertaining activities and games for Spanish language learners.  For children learning the letters in Spanish, the Bouncing Letter Game is an effective and engaging way to master the names of the letters.  The object is to maneuver a cart under a falling letter so that it does not hit the ground. Each time a letter bounces off the cart, you will hear the name of the letter pronounced in Spanish. The key to learning the letters is hearing them over and over, and this game provides lots of repetition.  It is fun and has several levels of play. In addition, you can easily reinforce and expand what your child is learning by repeating the letter names and by saying words that start with the letters you hear.

First, play the game to become familiar with it and to let your child hear the letter sounds.

Then, try these simple ways to reinforce the names of the letters and relate them to words as you play the Bouncing Letter Game.

Repeat the name of the letter you hear with your child:

1. Repeat the letter sound after you hear it.
2. At the easy level, there will only be one letter on the screen.  Repeat it many times until it bounces off the cart again.
3. Once your child is familiar with the letters, try to say them before they bounce and you hear the name.

Say a word that begins with the letter sound:

1. The names of the vowels are also the vowel sounds, and they are essential to correct pronunciation. Choose a word that begins with each vowel, and say that word when you bounce the letter.  For the other letters, repeat the letter name you hear.
These are common words you could say for each vowel:
a – adiós, amigo, avión, agua
e – elefante, estrella, escuela, esquiar
i – isla, insecto, iguana, iglesia
o – oso, ocho, otoño, oro
u – uvas, uñas, unicornio, universo

2. Say Spanish words that begin with some of the other letters as you bounce them. You do not have to say a word for every letter.  Start with the vowels and then add other words that your child knows.  Use the same word every time the letter is on the screen. For the other letters, just repeat the letter name.

You can get ideas of common words that begin with different letters in the Diccionario Gráfico on OnlineFreeSpanish. The activity provides the correct pronunciation of the words and several words that start with each letter.

3.  More advanced students can try to say a different word for each letter they bounce. This gets much harder at the higher levels because you have to think fast and there are several letters on the screen at one time.

This is an entertaining game and an easy way to master the names of the letters in Spanish and to reinforce the vowel sounds.  ¡A jugar!  ¡Que se diviertan!