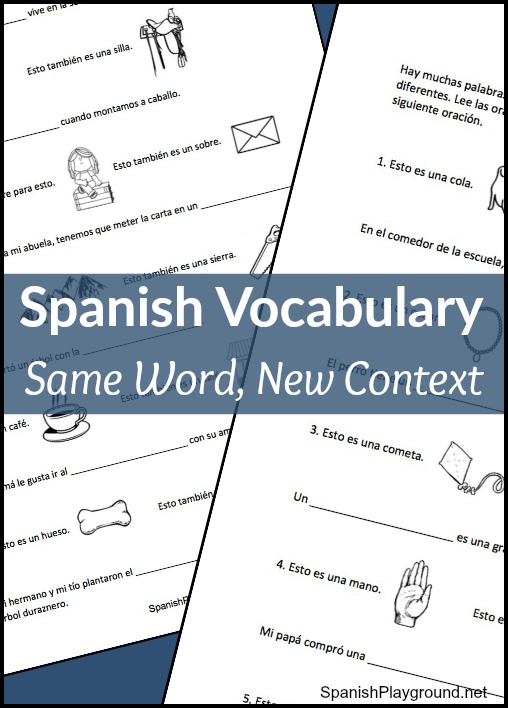 As kids are learning Spanish vocabulary, I point out different contexts where we use the same word. Introducing additional contexts builds understanding and makes the word easier to remember. I’ve included a printable activity for ten common words below.

In Spanish, we use many words in contexts where they are logical, but where there is a different word in English. For example, in Spanish we say silla for a chair and also a saddle. Likewise, we use collar for both a necklace and dog collar. I mention the English here, but I do not translate with kids. Being aware of different contexts in which we use the same word increases a child’s functional vocabulary.

Learning to use a word in different contexts also builds kids’ understanding of the word and the language. They see words can be both prepositions and nouns and that words can change meaning with gender. You don’t have to talk about parts of speech. Kids build connections based on the meaning of the word.

In addition, learning Spanish vocabulary by extending context reinforces Spanish and English as separate systems. When kids learn new words and then use them in different contexts, they see the world in a new way.

When you introduce vocabulary this way, be sure to talk about why it makes sense in the two situations. Ask what the contexts have in common. For example, kids learn the word hueso when they learn body parts. When I show them that hueso is also used for a pit in a piece of fruit, they see right away that it is something hard, inside the fruit, like a bone inside a body. Kids love discovering the logic behind using a word in a new context! Using the same word in different contexts makes learning Spanish vocabulary memorable and fun.

These are the examples on the printable activity below.

El hueso as bone and pit.

La silla as chair and saddle.

El collar as necklace and collar.

La cola as tail and line.

La mano as hand and bunch of bananas.

Sobre as over and el sobre as envelope.

This printable activity presents 10 common words that are used in different contexts. Kids read two example sentences and then use the word to complete a sentence. The sentences they complete are examples of the second context. 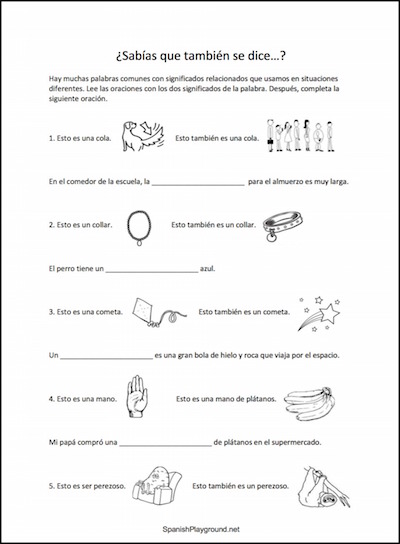