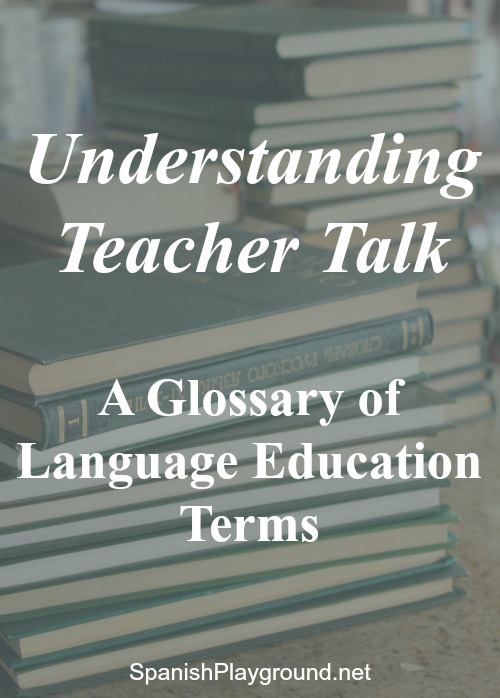 To provide a valuable experience for children learning language, teachers and parents have to communicate with each other. Inevitably, language education terms become part of the conversation. Not everyone is familiar with the jargon of the profession, however. This glossary of language education terms defines and gives examples for important language learning and teaching concepts.

There are many paths to teaching Spanish to children, so teachers themselves may be unfamiliar with language education terms. Spanish teachers come from many backgrounds, and teaching requirements differ from state to state. In addition, many instructors teach in after school programs or privately. These teachers may encounter the terms in professional conversations and literature.

Parents of Spanish learners also come from diverse backgrounds and may not understand the language education terms used by teachers and administrators. Having a reference makes it easier for them to support their children.

Janis Hanson, a friend and colleague, wrote this glossary for Spanish Playground. She has chosen important language education terms and written definitions with examples. These definitions are based on the accepted understanding of the terms in the profession. Of course, there are terms that we did not include. This glossary is not intended to be comprehensive, but rather a starting point, a reference of important language education terms for those unfamiliar with the field.

Download a printable version of the Glossary of Language Education Terms by clicking the blue button. It’s free! We just need an email to send you the link for the download.

Language education terms in bold in the definitions are defined in the glossary.

A teacher can help learners understand and remember a new idea by first activating their prior knowledge related to this idea. Teachers aid learners’ awareness of their background knowledge by asking questions about their previous experience, reviewing related topics, and providing practice using contextual clues.

Choral reading activities are those in which learners read aloud in unison. Simple, patterned readings are best for beginning learners. Choral reading activities can provide opportunities for learners at all levels to improve their command of target language pronunciation, stress, and intonation patterns. Many learners feel less nervous about reading aloud when they have the support of others in a choral reading exercise. In addition, choral reading can provide an enjoyable way for students to practice interpretive reading skills. For example, they may read some lines loudly and others softly, or some lines quickly and others slowly.

In a cloze activity, the learner’s task is to replace words that have been deleted from a reading passage. Depending on the learner’s language proficiency and/or degree of content knowledge, a word bank may or may not be provided.

Deductive learning takes place when learners show improvement through practicing a rule or pattern that has been explicitly taught. For example, a teacher could tell learners a rule about Spanish noun-adjective agreement and observe their improvement as they practice this rule using specific vocabulary. Inductive learning, on the other hand, takes place when a language learner figures out certain rules or patterns in a language after hearing or reading numerous examples. For example, a learner may be able to understand aspects of Spanish noun-adjective agreement inductively after hearing many examples. Deductive learning tends to be faster, while inductive learning tends to be more enduring.

Most language teachers use an eclectic approach, which means that they integrate a variety of methodologies into the instructional plan. For example, a teacher using an eclectic approach might include a Total Physical Response activity, a grammar review, and a choral reading in a single lesson.

English as a second language, ESL

English language learners (ELLs) are students who come from non-English-speaking backgrounds and who usually need specialized instruction in English and in academic content (e.g., math, science, or social studies). They are also referred to as English learners (ELs), English as a second language (ESL) students and limited English proficient (LEP) students. The term ESL has gone out of favor because some of these students are learning English as a third or fourth language. For example, numerous Mexican students speak an indigenous language at home and have learned Spanish in Mexican schools before coming to the United States. The term LEP has gone out of favor because it highlights a limitation instead of an asset.

FLEX programs are designed to give elementary or middle school learners exposure to one or more foreign languages. The programs are often short-term, with an emphasis on selected vocabulary, target language cultures, and the language learning experience. FLEX courses are normally not included in an academic sequence of courses for extended foreign language study. (See also Foreign Language in the Elementary School, FLES.)

A graphic organizer is a visual chart that represents ideas. Examples include Venn diagrams, flow charts, and word webs.

In an information gap activity, learners are given different sets of information, and they need to talk to each other about the information in order to complete a task. For example, two learners could have two different pictures that differ only in five details. Not looking at each other’s picture, their task would be to ask each other questions in order to figure out what the five differences are. Another example would be when each learner in a group has something written on a piece of paper on his or her back, and they all circulate, asking each other yes-no questions in order to guess what’s written.

Stephen Krashen’s theory of second language acquisition has had a large impact on language teaching practices worldwide since the 1980s. The theory consists of five hypotheses:

The Natural Approach, developed by Stephen Krashen and Tracy Terrell in the 1980s, is a second language teaching methodology that focuses on oral and written communicative skills.  It is based on Krashen’s theory of second language acquisition and on the assumption that speech emerges in four stages: 1. preproduction (listening and gestures), 2. early production (short phrases), 3. speech emergence (long phrases and sentences), and 4. intermediate fluency (conversation).

Realia are objects that a teacher brings to class to engage learners and help them remember important vocabulary. For example, if the focus is learning how to order food in a restaurant, the teacher could include in the lesson an actual menu and table setting.

Skimming and scanning are important reading skills. A reader will skim a passage to get the general idea. However, s/he will scan a passage to find specific details.

Most beginning language learners go through a silent period in which they hesitate to speak in the target language. It is important for teachers to remember that a learner continues to acquire language during this period. The length of the silent period is usually determined by the learner’s personality as well as the classroom environment. Students who hesitate to speak independently can be engaged through listening comprehension activities (e.g., Total Physical Response), small group interaction, and choral reading. (See also Krashen’s theory of second language acquisition and the Natural Approach.)

Target language is the language that the students are learning.

In a TPR lesson, learners respond physically to the teacher’s verbal requests, and they don’t speak until they have heard the words in the requests many times. Initial lessons using TPR often include target language requests such as “Walk to the door” or “Show me the pencil.” Using this approach, teachers can also prompt students to mime selected vocabulary. For example, if the teacher says “We are hungry,” students would be prompted to pat their stomachs. Developed by James Asher, TPR has been considered a best practice in language teaching since the 1980s. TPR Storytelling (TPRS) is a more recent adaptation of TPR in which a teacher combines a series of actions to create a story.

More learners are likely to respond more often if the teacher regularly pauses after asking a question. A three-second wait time after a question is considered ideal.

A word bank is a list of vocabulary words, usually about a specific topic. Teachers often provide word banks as support for learners as they perform increasingly more complex tasks.

Janis Hanson is Senior Lecturer Emerita in the Modern Languages Department at the University of Wisconsin-La Crosse.