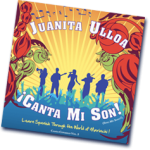 I was excited to see Juanita Ulloa’s name in my inbox recently.  She wrote suggesting that Spanish Playground readers might be interested in her songs for children learning Spanish. Juanita Ulloa is one of the nation’s leading bilingual performers and songwriters. You can read more about her wonderful music on the Juanita Ulloa website. Juanita’s latest CD of music for children, ¡Canta mi son!, has won a National Association of Parenting Products Gold award and a Disney iParenting Media award. Her voice and her music, for children and adults, are amazing!

Juanita has lots of great songs for kids, some of them particularly good for children learning Spanish as a second language. Her music exposes children to native-speaker pronunciation and has a strong cultural component, as it is closely tied to the musical traditions of Mexico and other Latin American countries. In addition, in her songbooks for Volumes 1 and 2 of Canta conmigo there is a teacher/parent guide that has dance, movement, and cultural explanations and suggestions.

Juanita has generously offered to share one of her songs here on the website. You can listen to all of Yo puedo contar de 1 a 10 below. I will mention a few other songs here too, and be sure to listen to the clips available on her website to get an idea of the wide variety of music she has available.

The album links take you to Juanita Ulloa’s page of music for learning Spanish. Scroll down to the album and click on listen. These are a few songs that work especially well with Spanish language learners:

¿Cómo estás, amigo? – on the CD Canta conmigo (Volume 2)
This is a wonderful call and response greeting song in two languages. It goes beyond ¿Cómo estás? Muy bien to include two common expressions that we use in Spanish when we meet someone. Mucho gusto and encantada/o are polite phrases that all children learning Spanish should know. This song would be an excellent way to begin a discussion of the importance of greetings, good-byes and related polite behavior in Latino culture.

¿Cómo estás, amigo? is also a good way to introduce, or reinforce, adjective agreement as girls sing encantada and boys sing encantado. One of the great benefits of music in learning Spanish is that children produce natural, correct structures and repeat them over and over. By making encantado/a agree with their gender, children begin to internalize the concept of agreement.
The song is in Spanish, then English. It also speeds up the second time around. The change in tempo makes is especially fun to sing.

This is my new favorite counting song. It has a fabulous rhythm! Kids count to ten and then back down – al derecho y al revés.

This song has something I always look for in counting songs and that is useful language in addition to numbers. As I mentioned, one of the benefits of music is that children repeatedly produce correct, natural Spanish. So, the best songs for learning Spanish have structures and vocabulary that children can use in many situations. Singing Yo puedo contar de 1 a 10, children learn and practice the verb phrase puedo + infinitive and the verb form vamos. Even beginning Spanish learners can apply both of these verb forms in other contexts.

The song lends itself to all kinds of activities and actions. The most basic is to have kids make a simple number line and keep the rhythm by drumming on the numbers as they sing them.  You can also assign numbers and have kids, in a line or circle, step forward and then back as the group sings the number. This gets trickier as the song goes faster, so another option is to have kids jump in place.

In terms of Spanish language learners, this song has lots of practical vocabulary, presented in a structure that makes it easy to learn and retain. The body parts are associated with verbs – una boca para comer, esta nariz es para oler, los oídos son para oir, etc. By adding actions, pointing to the body part and acting out the verb, children are always aware of the meaning of the words they are singing.

Wow wow wow – on the CD Canta conmigo Volume 2
This song is the perfect addition to a unit on animals. It introduces kids to the idea that animal sounds are expressed differently in different languages. The dog that says arf, arf, arf if we go to New york, si viajamos a Mexico él ladra wow, wow, wow.

The song is short and easy to learn. Children are always intrigued by animal sounds, and introducing animal sounds in Spanish adds another dimension to activities with animal vocabulary. Juanita has another super song for kids called El pato, el pollo y el gallo. It also uses animal sounds and kids love it!