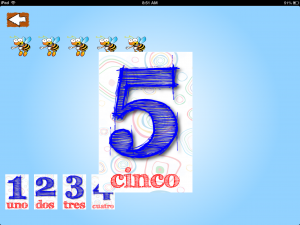 LinguiMind is an iPad app designed to introduce children to numbers, letters and colors in Spanish (and French and English). Like all the best apps for language learning, it takes advantage of the interactive nature of the device to engage kids with the language. This app is for very young children who are just beginning to recognize their letters and numbers. It is skillfully structured so that they actively participate with the language as they master these concepts. The LinguiMind iPad app for kids is available in the iTunes store.

The coloring game is a perfect example of how the app’s structure encourages kids to engage with Spanish. It has a drawing screen with the colors below (no picture to color, so kids can let their imaginations run free). When kids select red for example, a red box with the word rojo appears in the center of the screen. Kids tap on the box to begin to draw and when they do, they hear the word pronounced. If a child is too young to read the text, she taps the color, hears the word and then draws with that color – she is completely engaged with the meaning of the sound. If a child is beginning to read, the audio reinforces the text. 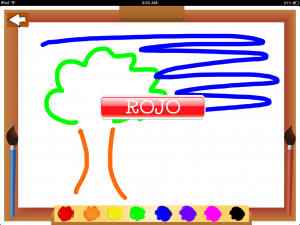 LinguiMind uses the same strategy to engage children with Spanish number words. Children count bees and flowers in two different number activities. In both of them, the objects animate and then a number card appears on the screen. It shows the numeral and the word. To advance, kids tap the card and hear the number, associating the Spanish audio with the number of objects and also the written numeral and word.

In the letter activity, kids slide the letter to the side to reach the next letter of the alphabet and hear it pronounced. Each letter is associated with a picture of a word with that initial sound. If kids tap on the picture, it expands and they hear it pronounced. They can also drag the object around the screen. Sliding back and forth, they can generate and control a recitation of the alphabet, with each letter isolated on the screen.

The memory game is another letter-learning activity. There are nine letter cards at a time (18 cards) and kids hear them pronounced as each one is turned over. The nine letters are randomly generated, so no two games are the same.

This app is designed for children in the earliest stages of literacy. The uncluttered screens minimize distraction and ensure that kids make the correct associations. It is an excellent introduction to colors, numbers, letters and multilingualism.