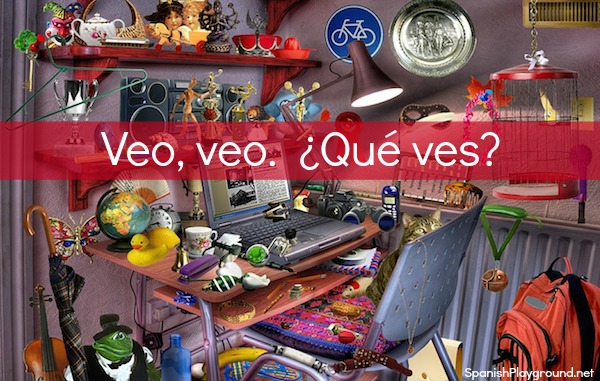 The game I Spy is Veo, veo in Spanish, and it begins with a simple rhyme – a question-answer exchange. This game and its many variations are wonderful activities for children learning Spanish. In addition to the traditional game of guessing an object, there are card games, online activities and books based on I Spy in English. This information is about the original guessing game, but I will write a post later this week about how other I spy materials are easily adapted to use in Spanish.

Veo, veo can be played by two people, a small group or a class. If there are more than two players, the children take turns asking the questions. To play Veo, veo one player selects an object that she can see and the others guess what it is. This game is played in many Spanish-speaking countries, and there are several versions of the rhyme to begin the game. In the most common Spanish version, the player looks for an object that starts with a specific letter. Another version involves looking for something of a certain color, and it is great for children who have not started to learn to read.

Beginning Spanish learners have a limited vocabulary, so you may want to play this game with a picture, a set of objects, or in a space where you are sure that your child can identify enough objects to make the game fun. Before you play, review the words your child knows by pointing to different objects and saying the words in Spanish at the same time. This will make it easier for your child to remember and enjoy playing.

Also, very beginners have an easier time being the player that selects the object.  A more advanced student, instructor or parent can guess by naming objects. The person guessing should point at the same time, and say the words clearly. This is a great way to provide comprehensible Spanish, and the beginner language learner can participate fully by just saying sí or no. Remember that your child is learning whenever she is hearing Spanish in a context where she understands.

Children use this rhyme to begin a game where the players look for something that begins with a certain letter. It is a good idea to review the letter sounds before playing by saying the alphabet together or singing an alphabet song. The rhyme is a conversation between whoever has selected the object (1) and the others that are guessing, who respond as a group (2):

Children use this second version of the rhyme to begin a game where they are looking for an object of a specific color. It is a good idea to point to different colors and say the word in Spanish before you start.

Music helps children learn language and there is a musical version of Veo, veo. The children’s group Parchís, from Spain, sang it and the song begins with the traditional rhyme, and then becomes a song about letter sounds. It is a catchy song and children like it. The whole song may be too long or complicated for beginners, but the tune of the original rhyme, that is the first three lines, is great to sing when playing the game. 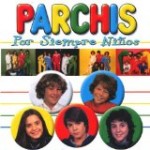 The song is available to buy on Amazon.  It changes the vowels in some words, the same way that I Like to Eat Apples and Bananas does in English. As a result, there are a few nonsense words created by playing with the vowel sounds. Each verse then uses real words that start with that vowel.