Geography in Spanish: The Continents 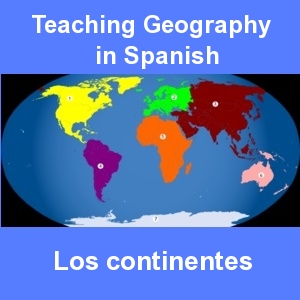 Talking about the continents with children learning Spanish lets you introduce or review geography vocabulary. In addition to the word continente and the names of the continents, you use words words like tierra, mar, océano, país, ciudad, costa, población, superficie, norte, sur, este and oeste. There are many online resources to make teaching the continents in Spanish easier.

This song is an easy way to teach the pronunciation of the seven continents in Spanish.

Here is a rap and video in Spanish about the number of continents. It explains the models and repeats the names of the continents several times.

Christmas Lesson Giveaway from Spanish for You
Spanish Printables: Winter and Snowman