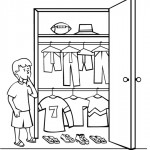 You can use this simple dice game to practice specific vocabulary with children who are learning Spanish. To play this game, everyone needs a copy of the same picture. You will also want to have a copy of the picture to use as a key that everyone can see.  I have included two coloring pages that you can print and use below, but any picture will do.

To play, assign objects in the picture a number, for example, 1=el sol, 2=el árbol, 3 = la casa.  You can cut out the objects and make a key, or write the numbers on the picture as a key. A player rolls the dice, and then colors, labels, circles, or crosses out the corresponding part of the picture. If she has already rolled the number, she does not do anything on that turn and play passes to the next player. If you play with one die, there are six designated objects. The first player to color all six objects wins. You can also play with two dice and up to 12 objects. In this version, a player can use the numbers she rolls separately or add them together.  For example, if she rolls a 4 and a 5, she can color the objects labeled 4 and 5, or the object labeled 9.

This game provides lots of repetition of new Spanish vocabulary. Each time a number is rolled, be sure to say what the number represents and point to the object in the picture. Talk about the object with your child. For example, you might say:
Tienes un tres. El tres es la casa. / You have a three. Three is the house.
Colorea (pinta) la casa.  / Color the house.
¿De qué color será la casa? / What color will the house be?
¿Una casa roja? / A red house?
Me gusta. La casa roja es bonita. / I like it. The red house is pretty.

You can also play by circling or putting an X on a part of the picture. This works well for practicing body parts or other smaller parts of a picture. You can use phrases like these:
Pon una X en la nariz. / Put an X on his nose.
Pon un círculo alrededor de la rodilla. / Put a circle around his knee.

These are other Spanish phrases you might use to play this game.
Talking to someone:
Te toca. – It’s your turn.
Tira (los dados). –  Roll (the dice).
¿Qué tienes? – What do you have?
¿Qué sacaste? – What did you roll?
Tienes un dos.- You have a two.
Ya pintaste (coloreaste) el árbol. – You already colored the tree.
Dame los dados por favor. – Give me the dice please.
Dale los dados a Hannah por favor. – Give the dice to Hannah please.