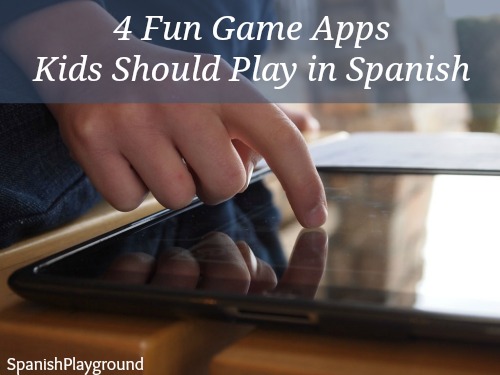 Are your kids playing game apps in Spanish? Of course, there are lots of educational apps, but there are also fun game apps that children can play in Spanish. These games were designed for fun, not as language learning tools. The experience is different, but kids can learn lots of language this way!

These fun game apps work for language learners because the pictures and action of the game provide context and reinforcement. Kids have to guess at words they don’t know, but they get instant feedback whether they guess right or wrong.

Many of the game apps you change to Spanish will not have audio. They are designed for children who can read, but you can also play with your child and read the text. There is often an option to play relajado, without time pressure. That is a good choice for kids learning Spanish.

The 4 fun game apps below have free versions. Some have ads though, so if one of them is a hit with your child, you may want to invest in a version with fewer distractions.  Also, as always, beware of in-app purchases!

1. Clumsy Ninja – There is a good chance your child is already playing this popular game in English. Change the language on your device to Spanish. Now kids can make Clumsy Ninja do all kinds of things and also figure out lots of Spanish verbs and vocabulary. One of kids’ favorite fun game apps becomes language exposure.

2. Farmscapes – The introduction for this game will still be in English with Spanish text, but after that there is only Spanish. Kids help fix up the farm by planting a tree, trimming a bush, cleaning a spring, opening a trunk to get seeds, etc. This app is for iPad.

3. Gardenscapes – In this game, kids find the objects listed. The idea is that these things are being sold to get money to restore the garden. Finding and touching objects that match the Spanish text kids will learn to recognize lots of words. Some of the vocabulary is a little strange, but a lot of it is very reasonable.

4. Hay Day – Kids can take care of the farm and learn lots of basic vocabulary. For example, when the chickens collapse, the text says gallina con hambre. When kids try to feed chickens that are not hungry, they see Ninguno de estes animales tiene hambre: Gallina. There are lots of actions and tools, and lots of language learning.