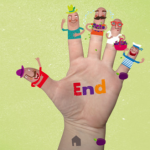 This free iPad app from Ridili teaches a simple finger play. The traditional rhyme, originally in German, is called Plums Rhyme, or La rima aciruelada. The app gives you the rhyme in five languages – English, Spanish, French, German and Russian. For each, there is excellent audio, beautiful graphics and on-screen text.

The Spanish version of the rhyme begins: Este es don señor pulgar. Él, las ciruelas cosecha. (This is Mister Thumb. He picks the plums.) The rhyme moves through the other fingers, telling what each does with the plums: Este, a toditas las junta. (This one gathers them all up). Este, a casa las lleva. (This one takes them home). Y este, el más pequeñito, se las come solito. (And this one, the littlest, eats them all up.)

I like this little app because it is so pretty and because the audio is very well done. The native-speaker narration is perfectly paced and exceptionally clear. Because it is a finger play, children can hold up each finger as they listen and learn the rhyme. The simple hand movements contribute to language learning and help keep children engaged. The rhyme is also interactive; children can tap the illustrations for additional sound effects.

Ridili publishes other apps with illustrated talking books for children (they call them Ridis). They are not free, but they are a fun, quality way to introduce children to other languages.