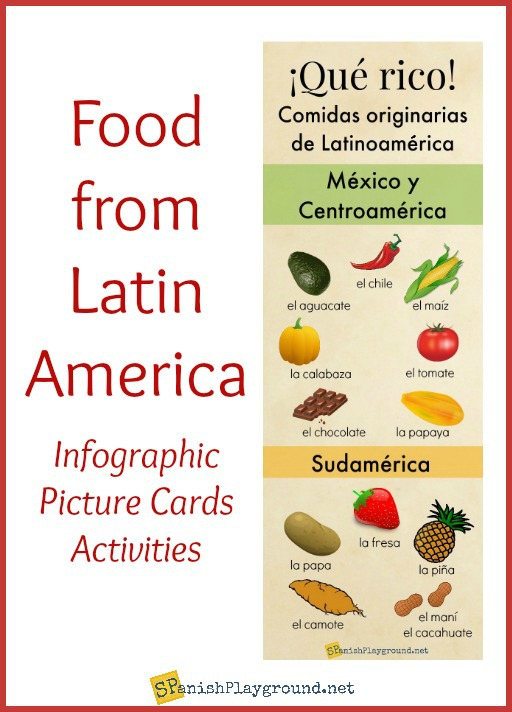 Many foods originated in Latin America and then spread around the globe, becoming essential ingredients of world cuisines. Learning about food from Latin America is an opportunity to learn language, geography and culture.

The infographic below is a tool for talking about food from Latin America with Spanish learners. I chose a selection of familiar foods, but there are others like quinoa, vanilla and lima beans that you may want to mention too.

Experts generally agree on the origin for the foods I chose. However, even with this limited set, origin isn’t straightforward, and our knowledge is constantly evolving. Some plants have two independent origins, while others originated in one place and were cultivated in another. For example, the Mapuche and Huilliche Indians of Chile first cultivated strawberries. These plants were later transported to England and crossed with another variety to develop the garden strawberry.

These general categories of origin for food serve well for language learning purposes. If students are interested in learning more, there are excellent resources online. The interactive map Origin of Crops from the International Center for Tropical Agriculture is a good place to start.

There is a mini-book and Power Point game with this food vocabulary and the verb gustar here: Me Gusta Activities with Spanish Food Vocabulary.

You can find more activities with Spanish food vocabulary here. In addition, these different ways to say delicious are a good way to expand a discussion of food words.  Both these sets of activities about fruit in Spanish and vegetables in Spanish include picture cards and a beautiful video.

This video about food originally from South America is a great way to practice listening and learn more about the 5 foods on the infographic.

These are the foods from on the infographic and picture cards:

This video about making guacamole mentions several of foods that originated in Mexico and give Mexican cuisine its delicious flavor! You can watch the Guacamole Recipe in Spanish on YouTube and find a transcript in the description.

You can use the infographic to practice question words and vocabulary related to the food from Latin America. These are examples of the kinds of questions you can ask students.

You can download picture cards of the food from Latin America here. 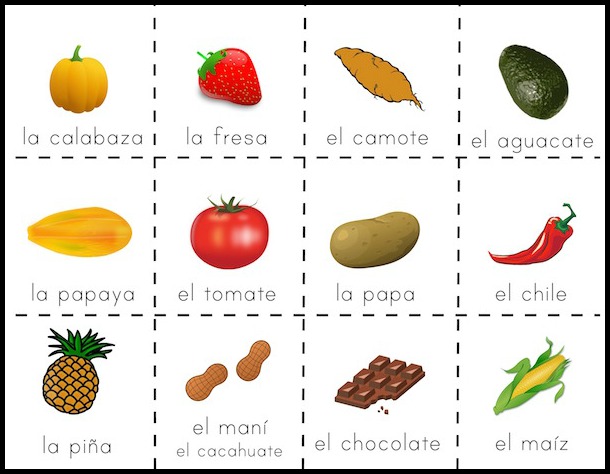