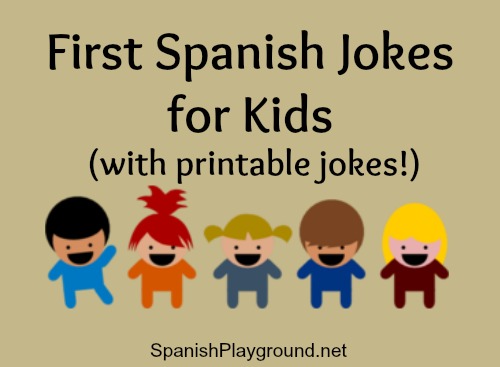 These are some of the first Spanish jokes that children can understand. Some depend on the double meaning of a word.  Other jokes play with the way sounds combine in Spanish, or with how the meaning of a word changes when the gender of the noun is changed.

See Spanish Jokes for Learning and Fun for all our Spanish joke collections and information about telling jokes with Spanish learners.

Depending on the child, and the joke, you may find yourself explaining why it is supposed to be funny. That is often the case with jokes in English, too. These first Spanish jokes are ones that children will be able to understand even when they are young, and don’t have sophisticated vocabularies.

–  Teach the word chiste and the phrase Te voy a contar un chiste.
– Establish a context for these first Spanish jokes if possible. For example, the first joke is about a fish, so tell it when you can point to a fish in a book, an aquarium, or draw a picture of a fish.
– Tell jokes with expression and give the characters different voices.
– Act out jokes if you can. For example, in the list below, with #5, extend your hand over and over; with # 9, point to your ear and nose when you say those words; and with #10, touch each body part and act as if you are in pain.

Children can learn to tell these first Spanish jokes. Of course, they will repeat them from memory, much like songs or poems. However, the jokes do not have the strict wording of songs, so children will not always be completely accurate in their grammar. Don’t worry! The fun of playing with Spanish and the growing awareness of the language is more important. Grammatical accuracy will come with time.  The easiest first Spanish jokes for kids to learn are simple questions and answers, like #1, #3 and #4.

Download a printable version of these jokes (without the translation or comments).

1. ¿Qué le dice un pez a otro pez?
– Nada.
(What does one fish say to the other?  This joke is based on nada meaning nothing and swim – the command form).

4. ¿Qué le dice una pared a otra?
– Nos encontramos en la esquina.
(What does one wall say to the other?  We’ll meet at the corner.)

5. ¿Qué le dijo la cucharita al azúcar? -Te espero en el café.
(What did the teaspoon say to the sugar?  I’ll wait for you in the café. This joke is based on the word café meaning coffee and cafe)

8. Dime. – Me. (Dime, literally tell me, is a common way of indicating that you are listening, like saying yes? in English. This joke is based on dime meaning tell me and also say “me.”)