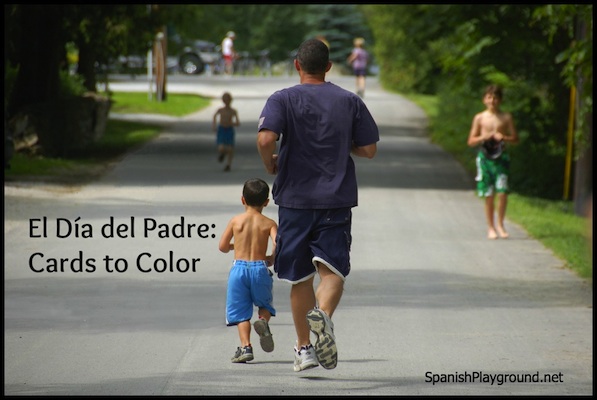 A printable card for el Día del Padre is a good language activity for Spanish learners. There are many printable cards that have a short Spanish text and are meant to be colored or decorated. The text is authentic language, yet it is often short and clear enough for children learning Spanish to understand. These cards make a great addition to any celebration of el Día del Padre.

To make the most of the language, be sure to read the card with your child. Talk about what it means as she colors or decorates it. Describe the pictures together. Then, use the language as much as you can in other situations. Many of the expressions of affection are perfect for saying to your child, too.

Guía de Manualidades has several printable cards for el Día del Padre. Some are simple with one short sentence, and others have more text. There is also an activity where kids complete information about their dads. It is titled Con Mi Papá and has sentences like:
Lo que más me gusta hacer es….
Nos encanta jugar a …
Fuimos a…
Soñamos un día poder…

El arte de recrear also has cards in black and white for kids to color for el Día del Padre. Some of these have blank spaces for children to write their own messages, and there are examples of phrases they might want to use at the bottom of the page.

Nourish Interactive has several printable cards for el Día del Padre. Most have simple messages like Feliz Día de los Padres or Feliz Día Saludable de los Padres (Happy Healthy Father’s Day). Some are in color, and there are others in black and white for kids to color. There are also certificates for el mejor padre and certificados de regalo (gift certificates) for a special activity.

Follow the link and then scroll down and click on the card you want. There will be a box on the right side of the next screen that says Descargue esta hoja (Download this sheet). Click on Archivo en español (File in Spanish) for the Spanish printable.