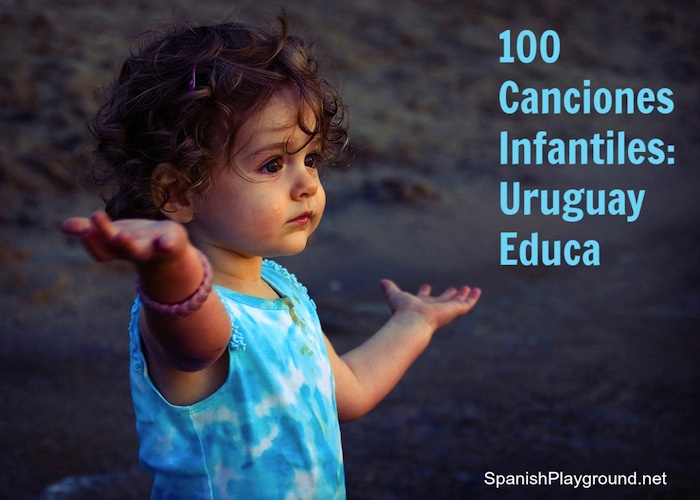 Since the time I wrote this post, Uruguayan government website has changed and the children’s songs are no longer hosted there. I am trying to locate the resource to update the link.

Recently Uruguay’s government-owned telecommunications company, ANTEL, donated 100 canciones infantiles to the Administración Nacional de Educación Pública to be distributed for public education. These canciones infantiles are available to download at no cost from Uruguay Educa, el Portal Educativo de Uruguay. They recorded by artists from all over Latin America (a few of the songs are in Portuguese).

This is a wonderful resource and children learning Spanish will love to listen to and learn to sing many of these canciones infantiles. Below I mention a few that work well with Spanish learners, but take time to listen to the songs and choose what works for your kids or students.

Link to 100 Canciones Infantiles – Click on the title of the song. It expands to show the album information, a player and a descargar button. (This link no longer works. I will update it when I have the new one.)

Canciones para no dormir la Siesta – Canción de la muñeca -This is a wonderful song for children to act out with dolls.

BaNdúla (México) – Voy Derecho y no me quito -This song is about the rights established in the U.N. Declaration of the Rights of the Child.

Cantacuentos – Dragón Glotón – This is a really fun song. There is a fast sequence, that might seem to hard for Spanish learners, but keep listening.  They repeat it slowly in the course of the song. As the performers explain, you eliminates one item and replace it with an action each time you sing the sequence.

Cantacuentos – Hay canciones. Hay una canción para cada momento. Para los tristes, y para los contentos…and the song goes on about how there is a song for everything and everyone.

Erica Büsch – Sale la Luna – This is a great version of one of my favorite songs about night.

Marcos Abramovich – Exprimir la Naranja – A fun song about orange juice. There is lots of repetition of jugo de naranja. Kids will be able to sing along with that phrase after hearing the song a couple of times.

Rubén Rada – No la dejes correr –  A song about conserving water. A twist on the saying Agua que no has de beber, déjala correr.

Susana Bosch – Al ciempiés – About a centipede who has lost one of his feet.

Susana Bosch – Hop caballito / Tengo yo – This track has two short songs, both about horses. The first is a fun song with clapping rhythms. The second is short and simple and works well with young Spanish learners.

Susana Bosch – Para escucharte mejor – A song about sounds and listening. During the song, the musicians talk about instruments and other songs. You can start after that section and just use the second half with Spanish language learners. It is clear and short.

Vera Sienra – Comparando – A song comparing kid and adults and how we all have similar behaviors, both good and bad.