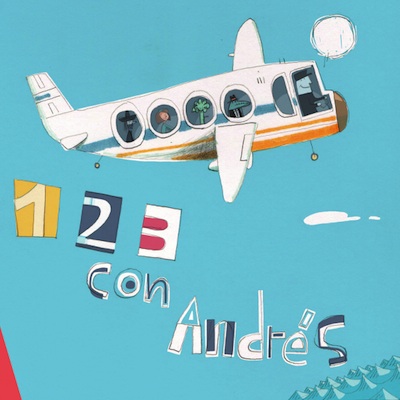 Andrés Salguero will be releasing his first CD later this month, adding a new voice to the growing body of bilingual music produced in the United States. Using simple language and heartfelt emotion, these songs in English and Spanish convey a variety of relevant experiences and feelings for kids growing up in our multicultural nation.

A native of Colombia, Andrés lives in the Washington DC area. He has been performing for children since 2007 at venues that include the Discovery Theater of the Smithsonian Institution and the National Theater in DC. Visit his website to learn more about Andrés Salguero.

1, 2, 3 con Andrés has 11 songs, all of which combine English and Spanish. If you read much at all on Spanish Playground, you know that as a general rule I prefer music in only Spanish for teaching language. It is important to note that this version in English and Spanish was not conceived of principally as a teaching tool. Rather, it is a gentle introduction to Spanish woven into songs about equality, acceptance and love. I’m pleased to say that an all Spanish version of the album is coming soon!

For Spanish language learners, this bilingual version of 1, 2, 3 con Andrés offers:
– a focus on common phrases
– lots of repetition of key words
– native-speaker Spanish
– an introduction to Latin music and instruments with performances by world-class Latin artists
– songs to promote awareness and consideration of others
– a beautiful CD lyrics booklet with illustrations by award-winning Colombian artist Carlos Diaz Consuegra