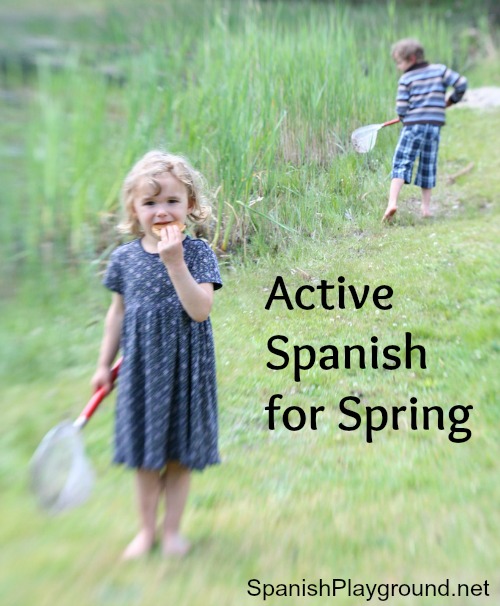 It is spring! The activities below get kids moving as they teach language about the season. These suggestions for active Spanish learning are part of the Easy Spanish-Easy Yoga series. You can find more information about the series at the end of the post.

Songs with actions combine the power of music and movement. As they sing songs, kids learn vocabulary and structures. Actions reinforce the meaning of the words and help children learn at a deeper level. Try these songs for active Spanish fun.

Los conejos is a song that kids learn in preschool and elementary school in many Spanish-speaking countries. My younger students love to jump and pretending to be a rabbit is the perfect reason to jump and sing in Spanish. Adriana Szuster has a version of Los conejos to download on iTunes.

Josefina la gallina is a very active song. It is an excellent way to combine physical activity and Spanish. The song is about a hen who behaves properly until she hears the song and then she runs, jumps, spins and flies. This song by Elizabeth Carmona is available to download on iTunes.

Pedro el conejto is a traditional song. There are many versions, but all of them are about a rabbit who had a bug on his nose. In some versions, the insect changes to una abeja and then to other bugs. In other versions it is always a fly, but the body part changes. You can hear the song below and Jose-Luis Orozco has fun version of Pedro el conejito that you can download on iTunes. You can see the actions in this video.

Yoga in Spanish is fun, active language learning. Yoga poses are associated with animals and actions, so kids are acting out words. Kids Yoga Stories has a post on Spring yoga where you will find poses to practice spring words by doing yoga poses. The spring sequence yoga flow has three poses: abeja, mariposa, flor. 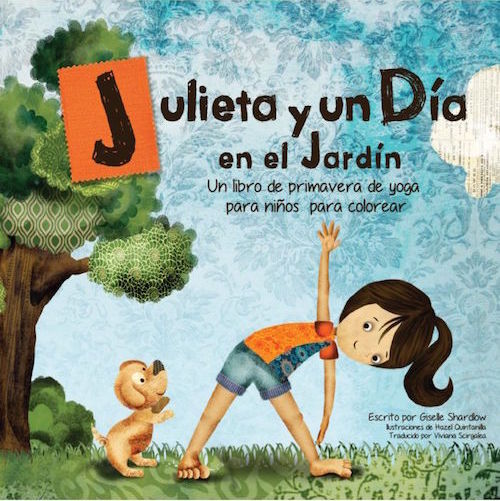 Kids Yoga Stories also has wonderful spring picture book in Spanish. Julieta y un día en el jardín is a story with yoga poses woven into the narrative. Children do the poses as they listen to the story. It is full of color words and spring vocabulary like sol, jardín, cielo, lluvia, árbol, hojas, tierra mojada, pájaro, nido, semillas, plantar, oruga, flores, abejas, mariposa, arcoiris. This is the perfect book to read aloud with Spanish learners in the spring! Julieta y un día en el jardín is available on Amazon and on the Kids Yoga Stories website.

Mar y tierra is a traditional playground game. It is very simple and it can be played inside if you have enough space and do not mind the jumping. Traditionally, kids jump over a line between areas designated mar and tierra. For a spring version, make the kids conejitos and designate the two sides of the line bosque and jardín. There are lots of videos of groups playing mar y tierra like the one below. You can also see an animated explanation of the game here.

Primavera Clap and Count Syllables is a printable game where kids clap syllables of spring vocabulary as they move around the board. Make this game more active by jumping the syllables instead of clapping. If you have space, you can even draw the game board on the driveway or playground and kids can jump around the board. Download the Primavera Clap and Count Syllables game board, games cards and instructions.

I hope this post of active Spanish games has given you ideas for working with your Spanish learners. At Spanish Playground, we are working with Kids Yoga Stories to create activities to teach children Spanish and yoga through basic concepts. In a series of monthly posts, we give you simple activities that you can work into a busy schedule. In addition to yoga, you will find other language activities you can do with Spanish learners related to the theme of the month.

See you next month for more Easy Spanish-Easy Yoga!