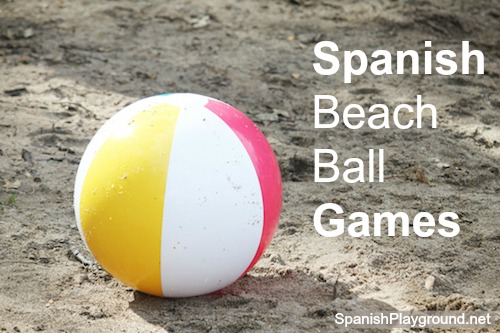 A beach ball, pelota de playa or balón de playa in Spanish, is a classic summer toy. It is inexpensive, easy to catch and fun in the water or out. These 7 games for kids learning Spanish are all played with a beach ball. They will get kids moving, laughing and hablando español.

1. Échala y habla – Toss and Talk
There are many versions of this Spanish game for kids. All of them involve using a permanent marker and writing a question or prompt on the beach ball. Kids play catch and respond to the question that their thumb is touching, or closest to, when they catch the ball. These are just a few of the things you can write on the ball:
– Letters – Kids say the letter or a word that starts with that letter.
– Numbers – Kids say the number, add the numbers (both hands), or do any other math operation with the numbers their thumbs are touching.
– Categories – Write categories on the ball. Kids say an item in the category they are touching. Possible categories include Comida, Animal, Cosa, Acción, Lugar, Fruta, País, Color.
– Personal questions or sentences to complete – This is a great game for practicing questions and getting to know each other at the beginning of summer camp or the school year. The sentences on the ball in the photo are:

– Actions – Write verbs on the ball. Kids do the action and then throw the ball. Verbs like correr, girar, saltar, gritar and aplaudir work well.
– Rules – Write rules that describe how to throw and catch the ball. Both players have to try to follow the rule. Use rules like por encima de la cabeza (hands over your head), pásala entre las piernas (between your legs), sentado (sitting down), parado en un pie (standing on one foot), con los ojos cerrados (with your eyes closed), acostado (lying down), etc. 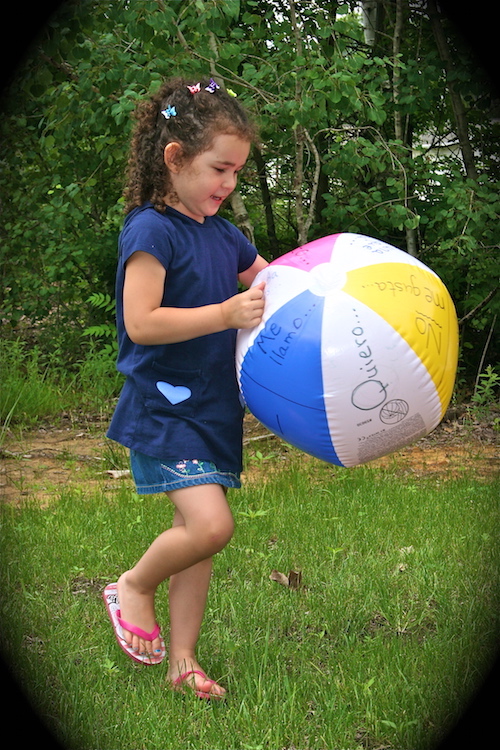 2. Sentar en la pelota – On the Ball
For this game each child needs a ball. Kids move in a circle with music playing. They follow instructions to jump like a rabbit, walk like a cat, gallop like a horse, etc.. When the music stops, kids sit on the ball until it starts again and they get a new instruction.

3. Tirar la toalla – Throw in the Towel
Toss the beach ball in a towel and try not to let it fly out. As you toss, count or say the alphabet, the days of the week or the months of the year. See how long you can keep the ball bouncing.

4. Arriba y abajo – Up and down
This is a version of the classic “keep the ball in the air” game. Kids work together to keep the ball from falling, saying arriba each time they hit it. Then, the leader (one of the kids or an adult) calls out abajo and the kids spread out into a circle and let the ball fall. The leader kicks the ball to another player and the kids pass the ball across the circle saying abajo each time they kick it. When the leader says arriba again and they throw the ball into the air.

5. Tu turno – Your turn – A beach ball can be used for all the activities we do passing objects in a circle, and it is more fun to toss than most. The ball can go around the circle or across. Prompts can be things like asking a question and throwing to the person who will answer, or reciting the days of the week, the months of the year or items in a category.

6. Pásamela – Pass it to me. This game is played with a beach ball and pool noodles. The idea is to pass the ball to another player, but before they hit it, kids have to call out who it is for. Kids can use Es para… or Se la paso a… Players cannot send the ball back to the person they got it from. You can cut the noodles in half for a little more control.

7. Rima y rebota – Rhyme and Bounce
This game uses a traditional rhyme and is usually played with a regular ball. A beach ball makes it a little easier for kids because it moves more slowly. Be sure to inflate the ball almost all the way and throw it pretty hard. To play, kids bounce the ball off a wall as they recite the rhyme. They do the action in the rhyme before they catch the ball (with no bounce). There are lots of different traditional rhymes for this kind of game, but A la una, mi aceituna is fun, with simple language and actions.