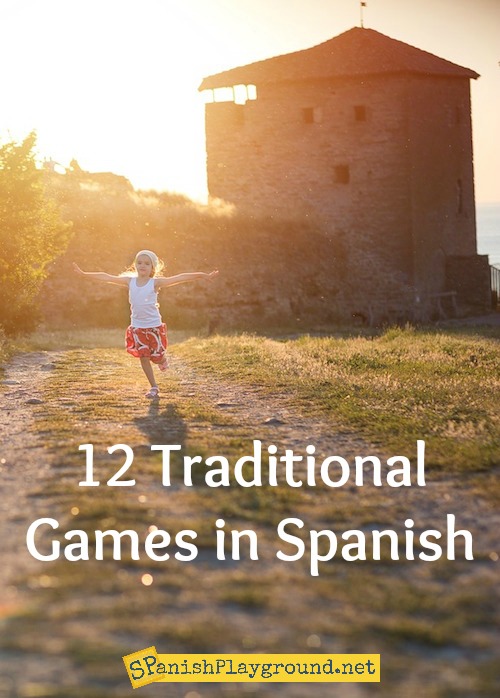 Traditional games in Spanish teach language and culture. These 12 games are from Latin America and Spain, and all of them incorporate language, so they are excellent to play with children learning Spanish. In addition to vocabulary and common grammatical structures, these traditional games in Spanish are culturally relevant and fun. They are played every day by children around the world.

These 12 traditional games in Spanish all have a significant language component that make them valuable for children learning Spanish, but they are not too difficult.

See our complete collection of traditional Spanish games for kids learning language. Also, read the Wikipedia article about more traditional games in Spanish to use with advanced learners or native speakers.

In the game, one player faces a wall or a tree with the rest of the group behind her at a distance. The group tries to move forward while her back is to them. She says Un, dos, tres momia es (or 1, 2, 3, calabaza) spins around, and tries to catch someone moving. Everyone must stand perfectly still, like a mummy (or a pumpkin), while she is watching. If she sees someone move, that person must return to the starting line. The first person to reach her takes her place.

1,2,3 Momia es is one of the active, traditional games in Spanish that you can play with kids of ages.

This game is called Basta in Mexico, but it has lots of names: Tutti frutti, ¡Mercadito!, Stop, Lápiz quieto, Animales con E, Alto el fuego, Ensalada rusa. It is one of my go-to Spanish vocabulary games because it uses categories. Basically, it is the original, non-commercial version of Scattergories.

Check out my printable boards for Basta for Spanish vocabulary practice and more details on how to score the game.

If you’re not using printable boards, everyone makes a game board with categories. Common categories include nombre, cosa, animal, fruta o verdura, color, país o ciudad and apellido. Categories can be anything though, including pop culture references like marca, música, famosos/as. When I play with children learning Spanish, I usually include verbo or acción as a category.

Next, players select a letter. One person says the alphabet very quickly and someone else stops her by saying basta. Whatever letter the person is saying when she hears basta is the letter for that round.

Basta is one of the traditional games in Spanish that you can use to review vocabulary. Make the categories fit the themes you have covered in class for a fun way to re-enter lots of words.

Tripas de gato is one of the traditional games in Spanish you can play with a wide range of ages. Players take turns drawing lines between pairs of numbers (1 to 1, 2 to 2) without crossing or touching any other lines. This gets harder as the lines form a maze.

Of course, as teachers we need Spanish classroom games that include vocabulary other than numbers. I adapt Tripas de gato to practice lots of other vocabulary.  Check out these adaptations of Tripas de gato for language learners and find more instructions.

Traditional games in Spanish teach basic concepts like numbers, and well as language. This game is played in classes in Mexico. If you are looking for traditional preschool Spanish games, this is a good one to try.

To play, everyone joins hands in a circle and walks singing the song. Then, the leader (teacher) calls out a number and everyone hurries to form a group with that number of people. I have also seen the game played using other traditional songs, like Limón partido.

This video shows A pares y nones with groups of different ages, so you can get a good idea of how it works. These are words that you hear in the video:

This is one of my favorite Spanish learning games. Like many traditional games in Spanish it has a chant in the form of a dialog, and kids often play on a bus or when a group is waiting. Players clap and they recite a dialog that uses high-frequency vocabulary, a regular -ar verb in the preterite and the verb ser in the preterite. If you are looking for traditional Spanish games for high school, this is a good choice.

This is one of my favorite preschool Spanish activities. This is a very simple game, and it can be played inside if you have enough space and do not mind the jumping. Kids jump between two spaces designated mar and tierra.

To play, kids line up beside a line on the ground, so that they can jump sideways over the line. They can also face the line and jump forward and back. One side of the line is mar and the other side is tierra. A person who has been chosen to call first calls out mar and tierra as the players jump across the line (or in place) to be on the correct side.

You can see videos of the traditional game Mar y tierra here.

There are many traditional hand-clapping games. The simplest are based on one word, like mariposa or chocolate. Others are much more complicated.

Hand-clapping activities are great Spanish games for class because kids practice correct pronunciation and also learn vocabulary and structures. Here are links to posts about a few of the most common that I use with kids learning Spanish.
Mariposa and Chocolate
Por aquí pasó un caballo and Estaba la Catalina
Marinero
Debajo del puente

The game rock, paper, scissors is played all over the Spanish-speaking world. In most countries it is piedra (rock), papel (paper) o tijera (or scissors). In Peru, it is called janquenpón, from the Japanese yan-ken-pon, and in Chile it is called cachipún. This is the rhythm that you chant as you play: piedra papel tijera

This is a one of the most versatile traditional Spanish games. It can be played anywhere, with any number of kids.  Children play Frío o caliente in Spanish the same way they play Hot or Cold in English. There are just a few Spanish phrases to learn, and you can easily adapt the game to review Spanish vocabulary.

To play Frío o caliente, choose one person who will look for something. That person leaves the room, and the others hide a small object or choose something in the room.

You may want to set a time limit of two or three minutes. The game ends when the person finds the object or time runs out. Someone else leaves the room and the game starts again.

The game is great for practicing yes-no questions and all kinds of descriptive language. Read about several variations of the game and a Veo, veo song.

Tag has different names in different Spanish-speaking countries. In Mexico, it is called la traes, which translates roughly as “you have it.” In Spain, it is called pilla-pilla or tú la llevas. In Argentina, tag is la mancha and in Peru las chapadas. Of course there are many variations of tag, but these are the phrases used to play basic tag in Mexico.

¿Lobo estás?, or Juguemos en el bosque, is one of the best-known traditional games in Spanish. To play,  children join hands and walk or skip in a circle. One child, the wolf, remains outside the circle, a short distance away. (An adult can also play the part of the wolf.)

Here are more detailed instructions for ¿Lobo estás? with adaptations for language learners and a link to a video.

Children learn language and culture from traditional games in Spanish, so I encourage you to try these at home or in class. I hope you enjoy these fun Spanish games!