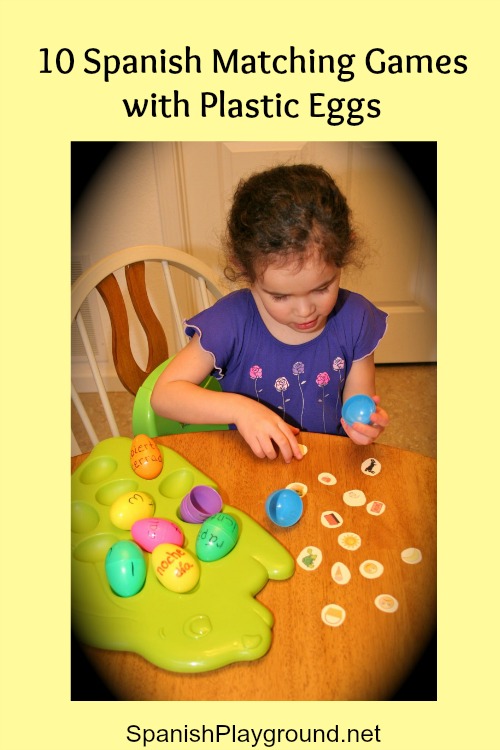 Plastic eggs are an easy, hands-on way to play Spanish matching games. You can make the activities more effective by using the inside of the egg too. Put a picture or object in the egg to reinforce the language written on the outside.

If you’re looking for more activities for specific vocabulary, check out all our Spanish vocabulary games grouped by theme.

1. Match initial letter sounds to pictures of objects. Here is a printable of alphabet picture cards with pictures for each letter. You can cut out the pictures and tape them to one half of the egg. Write the letters on the other half.

2. Match uppercase and lowercase letters to practice the letter names in Spanish. You can talk about letter sounds too by putting a picture with that initial sound inside the egg. Use the picture cards mentioned above.

3. Match numbers to number words. Get more practice with numbers by counting out the correct number of small objects, like dried beans or jelly beans, to put in  the eggs. 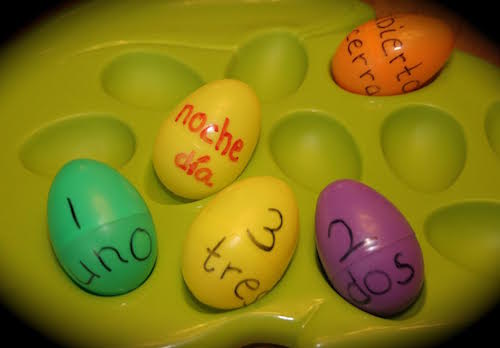 6. Match pictures to words. Use stickers or tape pictures to one half and write the word on the other.

7. Match rhyming words. You can put pictures in the eggs to reinforce the meaning of the words. Find a set of picture cards of rhyming words that you can cut out here: Printable Spanish Cards – Rhyming Words from Spanish Playground

8. Form words with syllables. Write consonant-vowel pairs on each half of the egg. Use syllables for words like va-ca, ga-to, pe-rro, me-sa, si-lla, ta-za, ca-ma, ca-sa. Be prepared for kids to make words that you had not thought of – syllables in Spanish can be combined in many ways!

10. Put a simple math problem on one half of the egg and the answer on the other. Kids can put the correct number of beans in each egg for extra counting practice.

Be sure to check out these other Spanish games for kids.